0.7.8 Llama's (wave 280+) Forge Guard Void Shield Throw build that will kill your FPS as fast as it kills mobs

A Shield Throwing, Abyssal Orb detonating, Smite proccing Sentinel, or, how I learned to relax & love the low FPS…

Do you like lots of black/purple explosions? Do you like auto-casting/procing skills & damaging effects? Do you like having low FPS (my record is 1 fps (rounded up!) in an Arena)? If so, this build might be for you.

By reading this guide you accept all liability for low single digit FPS. Potentially rounding up to 1.

My name’s Llama & I have a problem, I have alt-itis, I get more enjoyment out of starting new builds than I do finishing them off & taking them through end game. I also enjoy builds that are a bit on the arcane/obtuse side, with bonus points for abuse of aforementioned arcane/obtuse mechanics.

I started thinking about this build after playing around with a Warpath Void Knight (with warpath firing orbs & devouring orb firing orbs as well) but the down side for that was having to stop and cast Devouring Orb. And that’s why I started a new Void Knight using Shield Throw as then you can have Devouring Orb auto-cast more seamlessly (compared to Warpath). Then I heard about the Forge Guard’s Regenerator node (life on block & life on hit) & started a Forge Guard version… 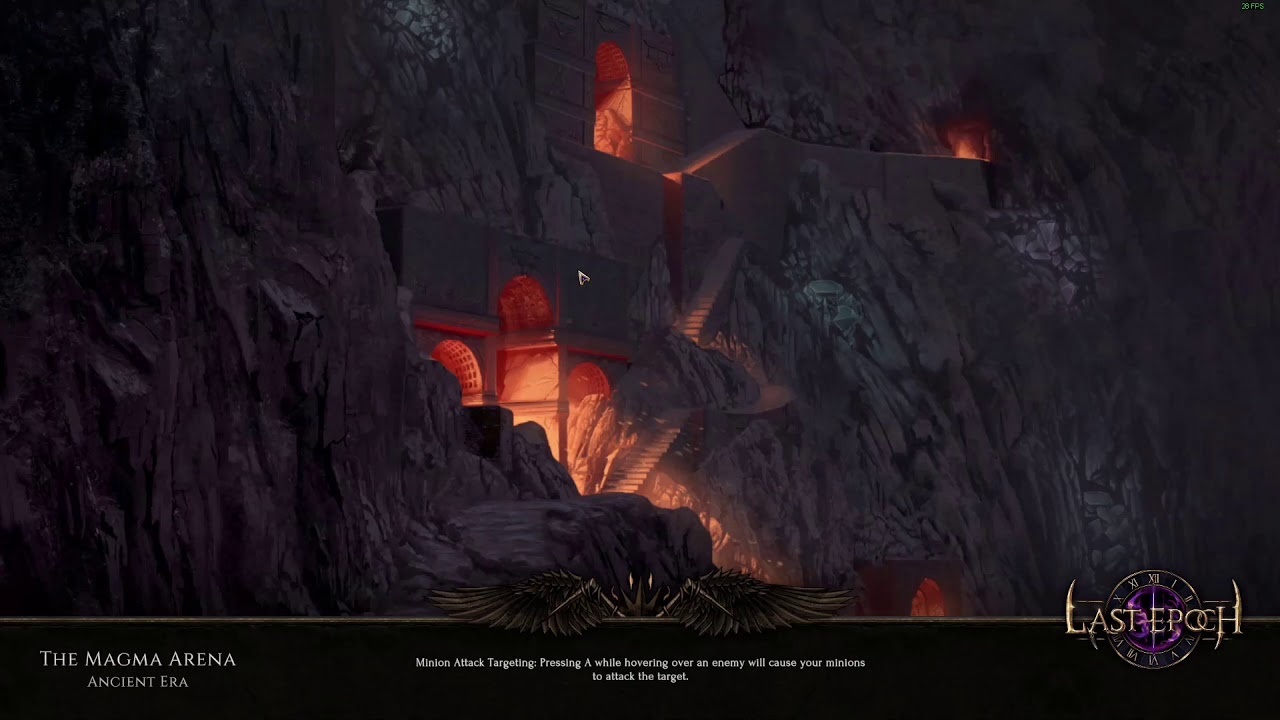 Outstanding introduction! Nice guide. Will try it in the future. Love shield throw with my forge guard, but did not use devouring orb with this build, yet.

If you don’t get to single figure FPS in arena, you’re not doing it right…

Edit: Got up to wave 175 on my first go with slightly iffy gear (neither glancing blow nor crit avoidance were capped).

Thank you for the detailed written guide, these are a rarity for LE builds.

Quick question - how do you recommend leveling the build? Just spam vengeance? Spec into leveling skills and respec later or just hold off on putting in the points and level with the build as you get the skills?

Really nice guide with detailed explanation of skill mechanics. Would be perfect if it comes with gameplay footage

From memory I levelled with Vengeance & Hammer Throw until I got down to Focussed Campaign/Shield Barrage, then you can spam Shield Throw & it should be free by that point as well.
Hammer Throw’s void AoE node is quite nice, it makes it a lot easier to damage multiple mobs that aren’t in a straight line so helps with packs.

The gameplay loop is fairly simple, Lunge into a pack (ideally to the champion if there is one) then hold down RMB until your FPS returns to normal which signals that everything’s dead.

Added a comment regarding Shield Crafter, it’s IMO necessary in arenas as your shields will start dieing in the higher waves (definitely by wave 150). Maxxed Shield Crafter increases their hp by 300% & gives you a 4% chance to cast Ring of Shields which happens quite a lot, to the point where I often have 10-15 shields active & have had up to 30 at once.

So, after some gear upgrades (void & necrotic protection) I died on wave 267 to a pack magic ice elementals (more hp & something else, not damage related) 'cause facetanking them is bad.

You won’t be able to react to anything that hits hard enough to kill you. (apart from Voidstone Scorpion & Spriggan champion AoE DoTs).

That said, my learnings are:

I tried 1 point in Dark Maw & didn’t notice my hp increase, so I think it’s just a form of leech. World Eater’s leech is probably pointless, so I’ll respec out of that to either more Abyssal Endurance (life & void protection) or Sorrow & Steel (% increased void damage). Other passives to put points in are 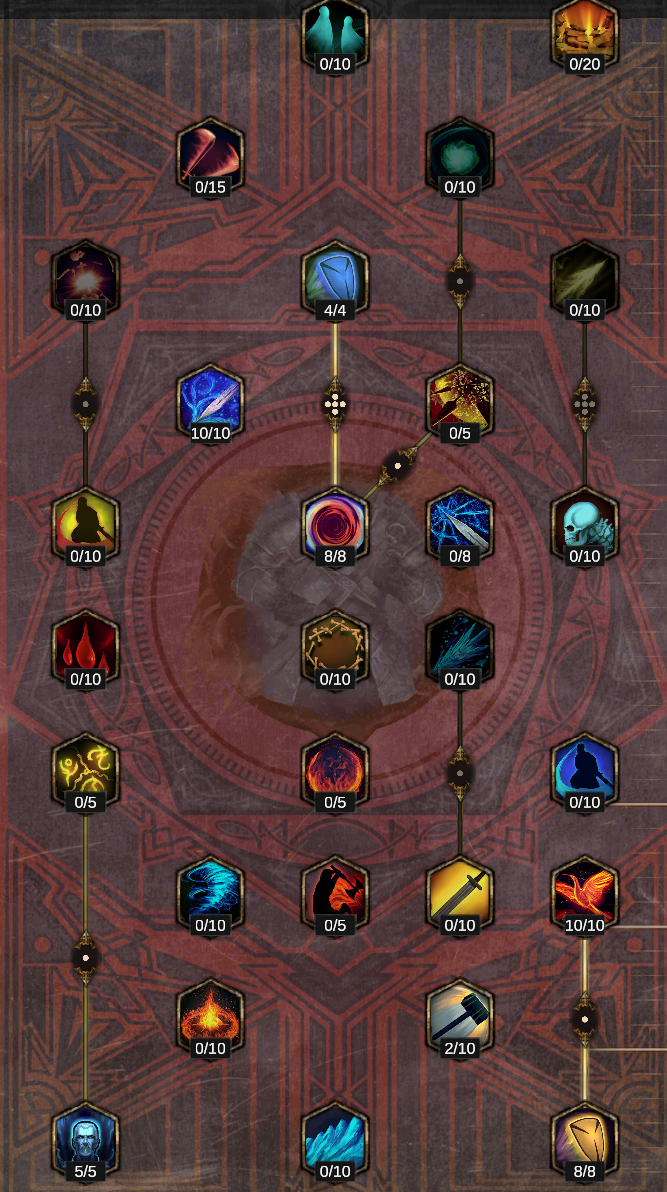 Thank you for this detailed guide, it is rare that it has leveling details for new comers which I hope encourages others to do the same. Will definitely try this out.

Does this build still work after the recent patch? If so I’ll give it a try

Yup, the shields from Ring of Shields feel a bit squishier, but you get more damage from Smite’s Fissure node working & I think Fissure counts as a hit and can therefore proc Regenerator.

I’d still go with maxxed Fearless & Gladiator which will get 13 points, then the next 7 are open to interpretation.

I’ve never tried it before, so I’ll probably go with Iron Mastery personally.

Hello Llama !
That’s a nice build you got there

This is so funny, i was actually doing a Forge Guard build which look similar to yours (and i though i was original

), except that it’s not using smite procs or void shield throw, but Vengeance (that sweet 2 sec of 36 % damage reduction… <3) and Hammer Throw with Disintegrating Aura (which btw looks sooooo dope).

The interesting thing is, it’s scale so much because of the global damage increase the void damage, the damage over time and the throwing damage, it triple dips and you’re tripling the damage of it

I wonder which one of our build is stronger

I’d say Shield Throw is probably a better Future Strikes application mechanism as it can hit a lot more mobs more times with the AoE from Eruption & the number of hits is all that matters.

For sure, Shield Throw is a lot better for Future Strike, but the problem i have with Shield throw is that it’s mediocre at best for single target damage, Devouring Orb is procing enough of regenerator stacks and Future Strike stacks to have a lot of health back

I’m using Void Hammer Throw because it still procs future strike and regenerator (a lot less than shield throw but whatever) and it’s very strong in single target damage (and insane mob trash clear), when you thow your 3 hammers spiraling around you and that their 3 auras touch the mobs…

Yeah, I’d not thought about the rotating hammers, that would be a lot better for single target. Though the majority of the time it’s not much of an issue. But when it is an issue, it’s annoying…

If you set up ST to also ricochet from allies it targets your RoS. If you stand close to the target the eruption proc from hitting the shields also hits the target.

Don’t know if it is as strong as the voidhammer. Actually haven’t got a VK setup for throwing attacks to test it.

That does make it quite a bit better for single target but it’s a significant reduction for clear since when you’re in close range it seems to prioritise your ring of shields rather than mobs. I commented as such in the guide above.

Edit: Or maybe I didn’t…

I would love to have a visual of the gameplay of this build, to have a better understanding of it

Thanks for the tip about Rallying block, I wasn’t aware of how broken this node was ^^