Why freeze chance is useless

Another part of the game that is rendered useless when enemies have a bit more health later in the game, is freeze chance. I like builds who can use crowd control to their advantage and do it fairly consistently. I fully support the idea that you shouldn’t be able to permafreeze bosses, as it would just feel like cheating. But I do feel like you should be able to freeze bosses with a low consistency.

In the examples below I am using Primalist skills and pets. As a mage you might have a slightly better chance to freeze some bosses, but it’s still really low.

I’m not sure how this could be improved, but I hope it will. Again I don’t want to be able to permafreeze bosses, but some improvements should be made, so you can at least freeze bosses sometimes. With the current state of freeze, it is even hard to freeze most normal enemies consistently and I think that’s sad. Crowd control is another defense you can focus on, but it should also be viable to focus on, and currently freeze is not viable to focus on.

I think one way freeze could work better against high health enemies is to scale the duration as opposed to the chance - you could freeze a boss, but not for the full duration. This is what Path of Exile does.

Yes that is also a good idea! But we still need a higher freeze chance for that to work, so something in the way it is calculated needs to change.

Today I saw something very interesting on the reap tree, that I thought was really cool. 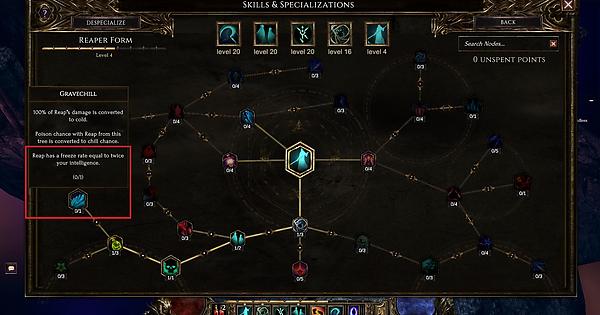 Something similar could be applied to either the calculation of freeze in general, or each skill that has a freeze rate could have a different interaction with Intelligence/attunement. I know some skills scale with attributes already, but this is only the modifier, which we know is really bad from my calculations. The part we should work with is instead the freeze rate base.

What do you all think about something like one of these? It would still require a lot of investment into Intelligence/attunement as well as increased freeze chance.

I hope they take their time with freeze. The options people present here are nice but there is a pretty small gap between good enough freeze rate and to much freeze rate from my point of view. Sure they could gove enemys more CC resi but this would be a bad move because you don’t need it then anyway :D.

Right now we don’t have all equipment implemented into the game and maybe the rates increase much further later on and freeze is in a bad state because of this? I don’t know for sure but debuffs and the ability to CC seem to have heavy requirements. So maybe this is intentional? Don’t know.

Thanks for compiling this data on freeze chance (and on shred/penetration in the other thread).

We were aware of the difficulty of keeping freeze chance high as enemy health scaled up rapidly at high levels, but this chart really helps visualise how severe the issue is. We’ve discussed this quite a bit internally since the thread was made and have decided on a systematic solution to the problem with scaling. However that’s unlikely to be ready for 0.7.3, so in the mean time we’re planning numerical buffs to several sources of increased freeze chance to alleviate the issue.

I’m glad to hear that it’s had an impact and I will look forward to hear/see what how you rework or buff these mechanics in the future. I just want more build options to be viable and fun.

As always I really appreciate how well you take feedback from the community. It matters a lot to all of us.

Basically as you deal an elemental damage, say ice, a small icon on top of the enemy will fill, when it reach max, the enemy fully frozen. More damage, fast the icon fill. Simple & elegent & make so much sense.

Ooo that’s actually a pretty cool idea. Idk how it would work in an ARPG though. Maybe it could work?