Why are there 5 useless Skillpoints on Class Upgrade?

Hey guys,
I want to ask you why you give the Class Upgrade 5 Passive levels from 25 to 30?

You level with points to 25. than spec into the Class (in this case the Sentinel) and instead of just going with the next skill point into the next passive note wich could require 25 points, you get 5 additional just visual points because you need 30 points for the next note ?! i mean it make no sense in any matter. 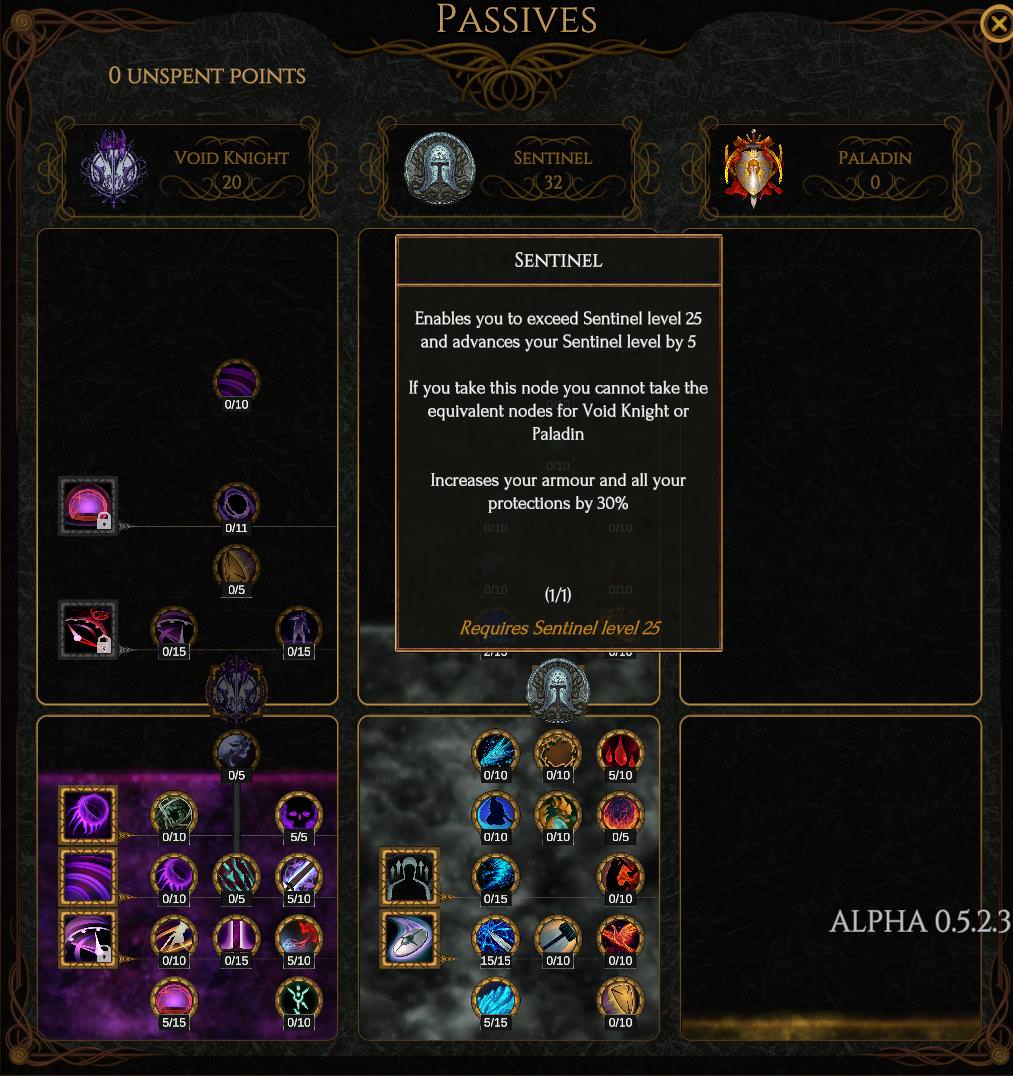 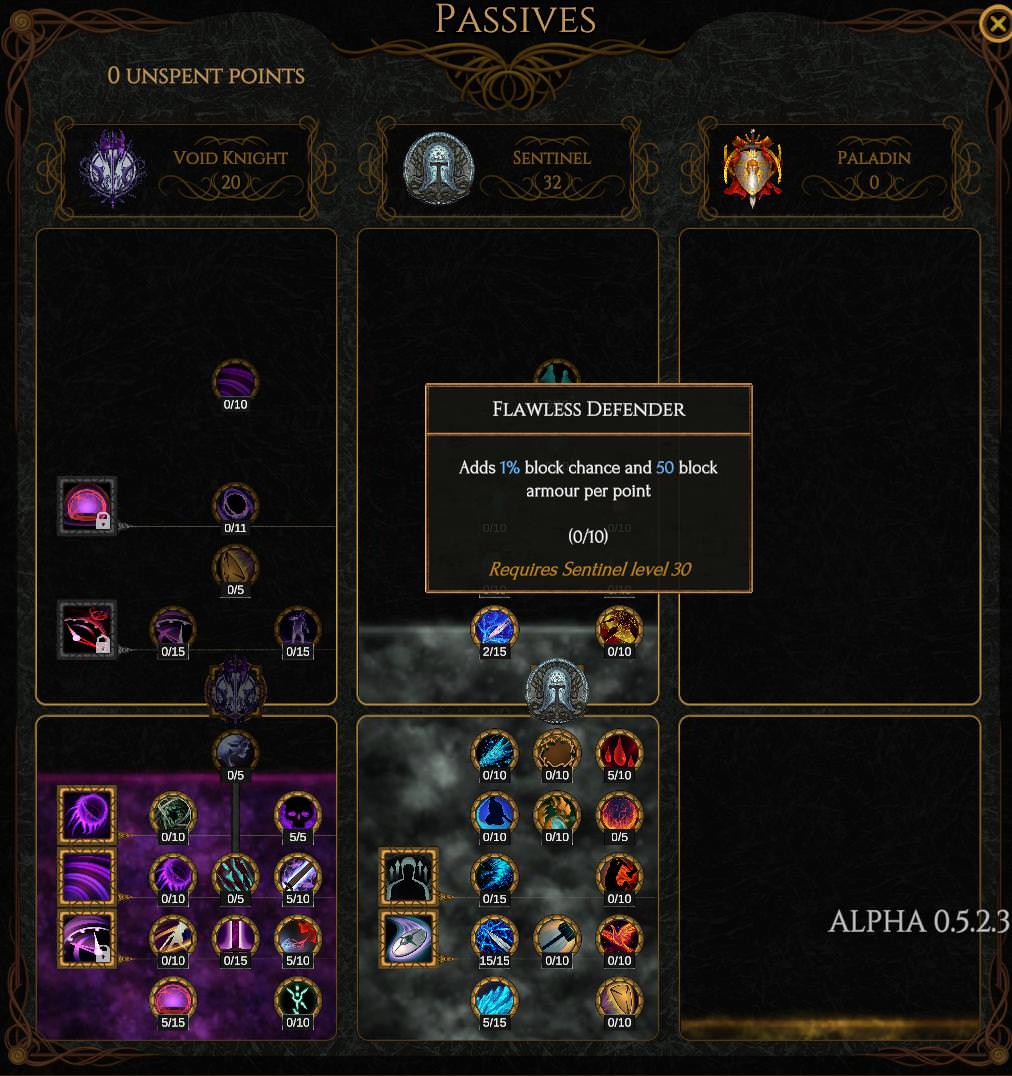 so here are my suggestions:

For historical purposes, here is the conversation that led to the design decision. IIRC the current format is supposed to be a placeholder until the ui is visually updated.

The conversation Geo posted goes into the background.

The short answer is that it means that when you ascend to your chosen mastery class it means you instantly unlock a set of nodes and a skill.

We could have achieved that by having nodes and a skill unlock at level 26, but that would have compromised the regularity of nodes and skills unlocking at levels that are multiples of 5, and the aesthetics of the UI would have suffered from that.

Ah i understand the design decision in terms of aesthetics, but for me it was alot of confusing getting 5 points, but only visual. I was like “oh cool i get 5 additional point…hmmm…no i dont?” so i think if you would get 5 additional “real” passives tree points, for like an bonus to achieve the Class Upgrade, it would feel better and a bit less confusing

For historical purposes, here is the conversation that led to the design decision. (yes, I’m really proud of my skills with paint)

But they felt it was a cramped so they added the 5 level jumps instead.

(I had another idea I didn’t shared and I didn’t take the time to design with paint would have been to unlock the advanced tree with a button in the box showing the level of the tree instead of the mastery node doing the bridge between basic and advanced tree to free some space.)

By the way, another issue with the tree progression is the delta between character level and tree level.
If my character is level 35, I want to have the sum of all tree levels to be equal to 35.
My OCD can’t take it.

Nice Job on paint! I avoid paint…I usually just make things worse. On yours I can’t even tell it was modified! Impressive.

On the subject, here’s some more brainstorming of ideas. Hopefully I’m not just recreating the wheel here, but an interesting subject, figured I’d pipe in on it.

#2 would take more work, but could be interesting for RP stuff. #1 is probably easiest while keeping the skill points flow feel natural.

On the subject, here’s some more brainstorming of ideas. Hopefully I’m not just recreating the wheel here, but an interesting subject, figured I’d pipe in on it.

Thanks for sharing your ideas!

I don’t think making the unlock automatic is a good idea, because it will be difficult to convey that to the player clearly. And since it’s supposed to be a big decision, being able to make it by accident seems a bit weird as well.

We have had discussions about tying masteries into a quest, and we really like it from a story perspective. It adds weight to the choice, and adds more class lore. But from a gameplay perspective, it’s an interruption to the flow of building a character. Once you want to access the later nodes in a mastery, you would have to stop whatever you’re doing, and work on another quest instead. Now, we could design the quest to become unlocked during a lull in the story and that would be fine. But because you are allowed to invest in multiple trees at once, we aren’t able to time the quest well.

We’re certainly open to designing a better way to represent the transition visually or giving actual points when a mastery is chosen, but we don’t have a firm plan and it works ok for now.

Also, imagine this: Each Mastery has a quest that goes to a unique map/time period and the only way to see that map is to pursue that specific Mastery. Not only would it be cool, it would provide another reason for players to try other classes and would enhance long term interest into the game.

Agree. Would second that.

Agree. Would second that.

I also think this would be a cool idea.

As you said, it’s a big decision. So I don’t think a quest is inappropriate or interruptive.

But from a gameplay perspective, it’s an interruption to the flow of building a character. Once you want to access the later nodes in a mastery, you would have to stop whatever you’re doing, and work on another quest instead.

Either it’s a big decision, or it’s not. By not interrupting the flow of character building, you’re basically turning it into just clicking a button to get some new nodes :\

Definitely like the idea of a mastery quest, I don’t mind a break in the flow for something like that.

Just to give the opposing point of view. (Not saying that I have it, but for balance.).

I can see timing being a real issue with any sort of Mastery quest once all 3 Master classes per class are implemented. It would be possible to have the quest start as early as character level 26 or higher than level 70. Those are very different places in the storyline and in the character development. Having a meaningful quest to fit that range would be very difficult.

The other big issue would be having a Mastery level worth the effort to obtain. With 3 Mastery classes and all the points that could be spent before reaching level 25 in any of them, it is possible to not choose a Mastery class at all, or to choose one that is different from the class that you spend the most points in.

as early as character level 26 or higher than level 70.

It’s possible to have the quest available earlier (e.g. at the first town). You’d receive your mastery, you just wouldn’t need it until level 25.

Or you just have the quest be instanced and the NPCs involved scale based on character level. Seems like that would be a logical route, given the suggestions that the quest somehow also involve time-travel and a view into the history/future of the world and its inhabitants.

I feel that this also accomplishes most of the problems with the system itself.

first off, the current system is counter-intuitive already. 5 points magically appearing are going to make anyone wonder what they heck just happened, and drive them to the forum for answers. it’s simple, but not intuitive. so even if we went with the “magic” unlock in my first example, it would probably be at the least as counter intuitive as the current model, if a bit more complicated.

Mastery quests solve this by using the quest system to explain the intricacies of the new class and possibly even challenging you to use some of the classes abilities during the quest. Once completed, you have the option of unlocking that mastery.

Obviously putting points into another skill tree and getting to 30 unlock another mastery quest and complicate things. But it’s still intuitive. players can go talk to their “master” at any time once they’ve completed a quest chain and choose that “mastery” if it’s available. But at some points your master will force you to choose a “path” thus unlocking the tree and subsequent skill points. If a player decides to abstain from choosing at that time, and then puts 30 more points in another tree, they can do the mastery quest line for that tree as well, but it will still ultimately fall down to them choosing a path from their master.

Knight puts 30 points in the Sentinel tree, where they get a quest to go talk to a Master Knight somewhere in Knightly land of fluffy panda’s. Master knight indicates that they are ready to learn more about one of the true knights of the fold, the “Sentinel” and to do this, they have to travel back to the past and relive his life events that led him to being the Sentinel of all Sentinels.

So you do the quest, get some cool stuff, learn some cool things, and learn about a few of the advanced skills (perhaps given as temporary skills during a solo instanced event). you get to try them out, and once all is said and done, you return to your master, and they say, “Are you ready to ascend Knight of the round port-a-potty!” you say Yes! and you get the unlock and perhaps some cool gear item focused on the class (in this case a shiny shield would do good).

But lest say your not sure, so you tell your master that. He responds with “many paths are their to the mighty port-a-potty” and tells you to go learn more, opening the option to try other things. So you try the Route of the void knight, unlocking that mastery series. The master now sends you to a future where all is bleak and dark, and the void knight reigns supreme over dark lands consumed by dark…uh…darkness.

You come back, and he says, “gratz! you know have two paths before you, which shall you choose?” And when you chose one, the other is lost.

Or perhaps they’re all future possibilities based on you, and your deciding your own fate. Lots of cool possibilities in this, but it all falls down to the same thing. It’s smooth, it teaches players about the advances classes they are trying out, and gives them the option of NOT choosing that advanced class and unlocking another. If they’ve done all the quests for that class, they have 3 options! not even sure if that’s doable (are we going to be able to reset points in this game?), but it still works well, because you have done the quests for each AC, and you can choose one or another at any time.

Only downside is developer time. But I think it’s worth investing in!