Under the Sentinel character, I specialized in the Warpath tree and have 3 pts invested in Scavenging Spin for the 9% melee health leech. In the past, I noticed my character screen would show 0% for “melee damage leeched as health”. I noticed this would jump from 0% to 9% when I activated Warpath. Once I stopped the Warpath attack, the displayed stat would drop back to 0% on my character screen.

I have recently invested some passive pts into World Eater (Void night) to up my melee damage health leech. With 5 pts in World Eater, my character screen displays 8% melee damage leeched as health. What I am not seeing is an increase in this stat when I activate the Warpath attack. The displayed stat is not changing from 8% to 17% during Warpath. It stays at 8%.
Side note, my character’s displayed speed is still changing under Warpath. Character screen displays the character’s speed at 23%. When Warpath is activated, the displayed speed drops to -2%.

I tried respeccing, removing the passive pts from World Eater, bringing it back to 0. While the character screen again shows 0% for melee damage leeched as health, the displayed stat stays at 0% during a Warpath attack, instead of displaying 9%.
I’m currently using a 2h sword, no shield equipped.

That is very odd (& sounds like a bug). Would you mind posting your warpath tree (imgur.com is your friend)?

Unfortunately that’s not the right link-- Try either copying the address from the address bar of your browser when looking at the imgur post, or right click on the image and select “copy image location”. Thanks! 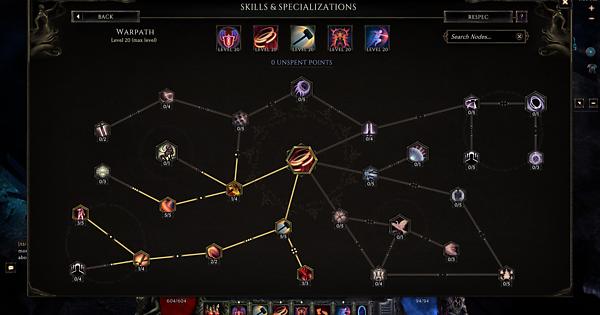 Thanks, we’ll look into it.

Also having the same issue. Not displaying on my stats page nor does it seem to be activating.