Compilation of ideas for changes to the Hungering Souls skill

Ever since I started playing this game, I’ve fallen in love with Acolyte’s Hungering Souls skill. While the skill has a few playstyles that are fine as is, I found the skill’s DoT aspects to be lacking and also thought that the Isolation tree was rather weak, particularly the mana nodes.

I have compiled this list into two main sections. Section 1 deals with a completely new cluster of nodes that I’ve thought up, focusing completely on the skill’s Possession mechanic.

Section 2 looks into slight changes for the Isolation nodes as well as a complete rework of Soul Drain and a couple new nodes that increase Isolation’s damage and utility potential.

One thing to note is that I’ve intentionally left many numerical values as +X or X%. The developers know better than me what sorts of numbers and scaling they want in their game, so I figure it’s more helpful if I just give mechanical ideas and leave most of the numbers out, just in case any of these ideas actually make it into the game.

Before I really get started, I’ve created a makeshift visual guide that shows where these new nodes connect and how many points I would estimate should be put into the prior nodes to unlock them. 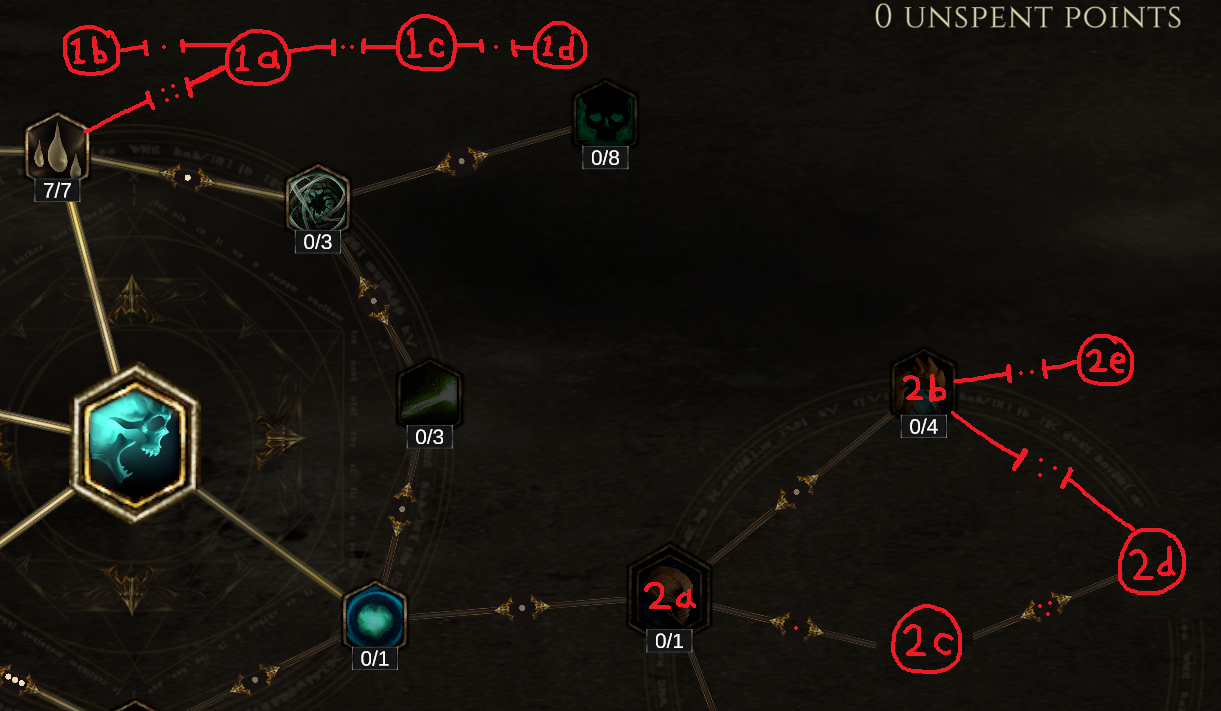 1a. Intangible Torment [0/1]: Hungering Souls no longer deals damage on hit. Possession duration is increased by 100%.

This node sets the basis for the new possession mechanics. Taking it locks the player into focusing on possession as well due to the removal of on-hit damage. I should note, if the Poison status requires damage to apply, then maybe this node should be 90% less hit damage instead, as it would not make sense to cut Poison out of a DoT playstyle.

I figured that it would be interesting to allow possession to bolster ally and minion damage a bit. Originally I had this as a % increase in damage taken, but felt it may be too close to Marked for Death that way. Of course, this could always be changed back, but the idea is to make possessed enemies more vulnerable in some way. Additionally, perhaps the added Necrotic damage could scale with Possession’s base damage.

1c. Soul Infestation [0/5]: Enemies can now be affected by multiple stacks of Possession. Maximum number of stacks increases by 1 per point. 10% reduced Possession duration per point.

This is where the DoT aspect of the skill really starts to ramp up provided you want to focus into it. You may notice that I actually put a set point amount on this one, and this is because I believe these would be the most balanced values. The “reduced” duration could also be changed to “less” if it became too easy to get all stacks. Whatever the case, I think each stack should increase the potential damage while making it harder to upkeep maximum stacks, leading to a risk reward playstyle that combines DoT and Cast Speed for strength.

1d. Release [0/1]: When a Possessed enemy dies, Hungering Souls are released from their location, targeting the nearest living enemy. The amount released is equal to half of the Possession stacks that were on the enemy when they died, rounding up. With Isolation, only one soul is released.

This is the “climax” of this tree, creating a snowball effect for players diligent enough to consistently keep up high possession stacks on enemies. Combined with existing nodes like Life Hunt, this creates a cascade of death that spreads through the area. In order to make up for the power of this node, it could come with increased mana costs, or maybe the effect that Blood Rip chaining has where it doesn’t work if the player doesn’t have enough mana.

2a. Isolation [0/1]: Hungering Souls can only ever release one soul. This soul is much larger and deals X% More damage.

There are two adjustments to note here. The first is that I think this node should give a more modifier rather than an increased one, while the second is that the node no longer specifies on-hit, meaning that the large skull now deals increased Possession damage as well.

The only change here is an adjustment from hit damage to total damage.

2c. Volatile Ether: The isolated soul explodes upon possessing an enemy, damaging nearby enemies for X% of the soul’s hit damage. The size of the explosion scales with the soul’s size. Enemies damaged by the explosion are not possessed. +X to mana cost per point.

This node shifts Isolation from being purely single target to being able to wallop enemies that are bunched together. It also serves to remove some of the frustration of the soul not going for the enemy you’d like when it’s too close together with other units. Of course, taking this node doesn’t give any more damage to the main soul, meaning that potential single target damage is traded away for AoE acquisition. At first I was wondering if the explosion should still be allowed to possess, but figured that may be broken with the new DoT nodes that I designed.

This node makes the skill a bit trickier to use, as you end up having to be closer to an enemy in order to hit them. However, the damage and AoE makes up for this. As you can see on the visual guide, this is connected to both Great Soul and Volatile Ether. This is to keep the option of it open as a DoT booster, Hybrid booster, and an AoE/Hit booster.

Soul Drain, as it is now, does not do enough, and so I wanted to simply remake the skill while keeping to the idea of mana being returned in some way. This can both be a boost to regular usage of the skill, while also being able to turn Hungering Souls into a “Fire and forget” skill that’s used for decent mana regen and single-target focusing with the new Intangible Torment and Soul Shredding nodes. Perhaps there could be a health regen boosting node beyond this where the soul returns to you when its host dies, but I only had this idea as of writing this post and thus did not put it in.

I hope that you enjoy some of these ideas! As a Hungering Souls enthusiast, I think that many new playstyles would be opened up if even a couple of these nodes were added in. Players could focus on multi-target DoT, single target DoT, better Hit/DoT hybrid builds overall, clustered AoE burst, mana regen and ally/self/minion damage boosting, among a few others!

Please provide any feedback about the nodes or feel free to give some other ideas here! Also, if any of the descriptions are confusing, please tell me so and I’ll try to adjust them! Clarity is key when it comes to ideas and suggestions.

Thanks for taking the time to make such a detailed write up. A lot of your points and suggestions are good ones. I’ve made a note to look back at them when we come to change the tree.

In particularly I agree that the existing options for DoT specialisation and stacking damage over time are lacking and future changes to the tree should address that.

In terms of some of the more transformative node suggestions:

Thank you for the reply! Whether any of my ideas make it into the game or not, it’s good to know that they might be considered as worthy candidates!