How the Loot Filter works

Before we begin, just to make sure we are all on the same page.

The Loot Filter does work from the top to the bottom.

If an item matches all Conditions of a Rule, EVERY other Rule below that will be ignored (not even checked)

Example:
We have several magic Items on the ground here with random affixes, but only 2 of them have Tier 5 Affixes on them 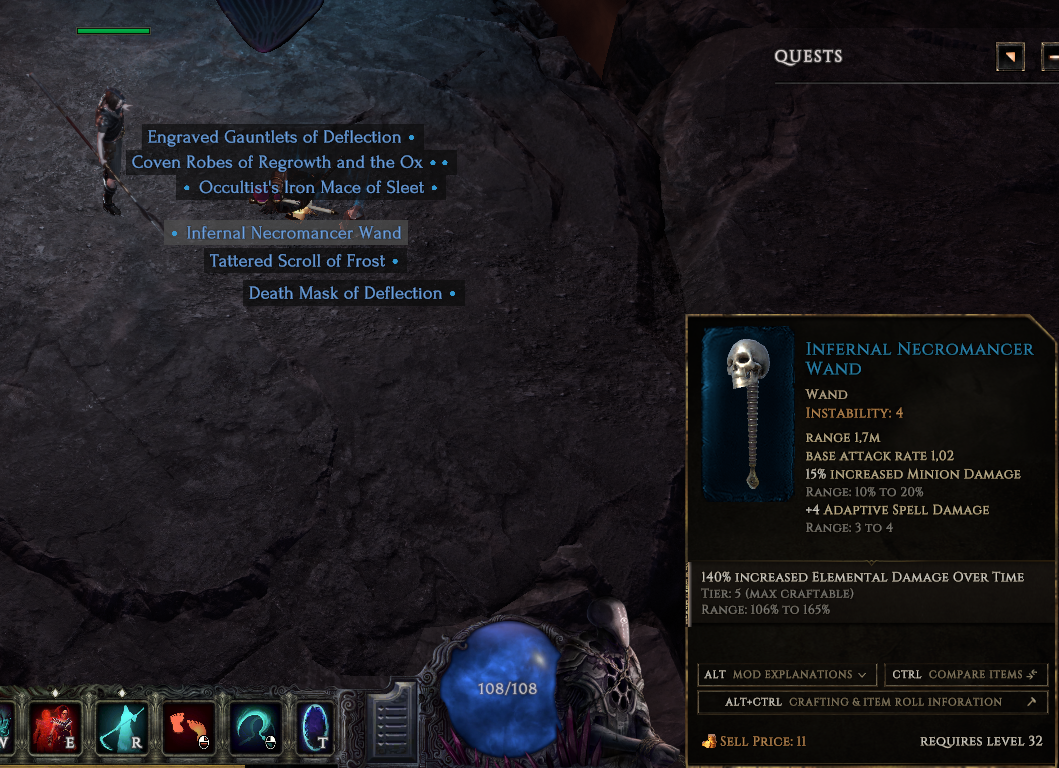 For this Example i did create a very basic loot filter: 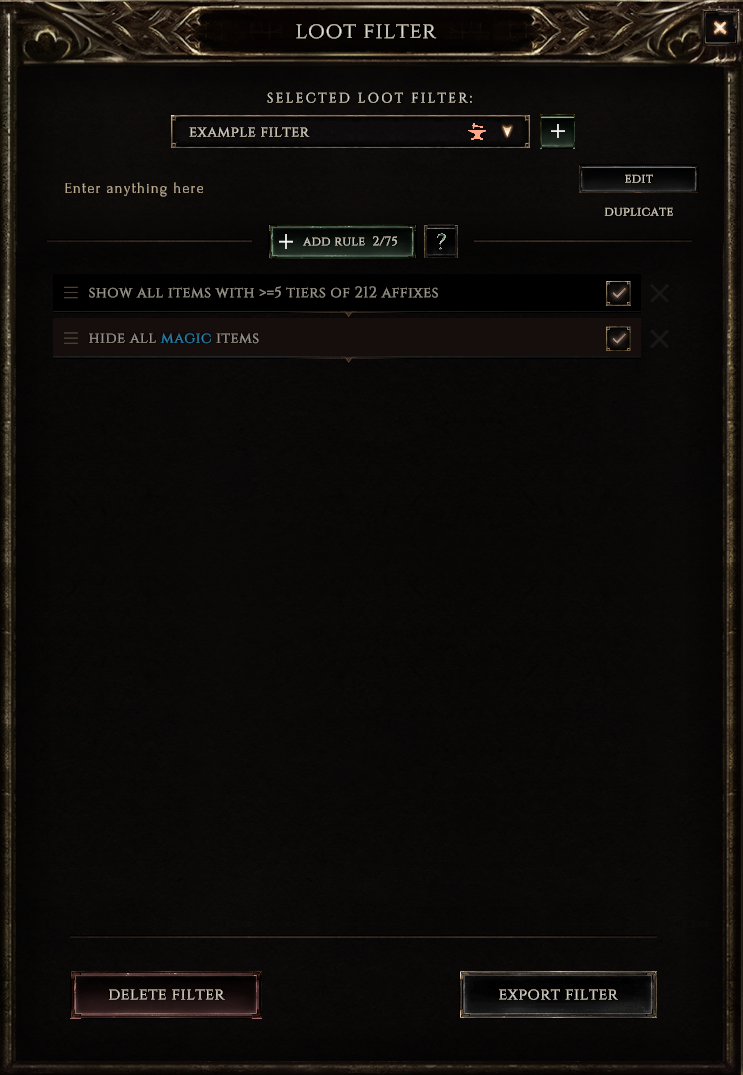 I currently have 2 different rules active: 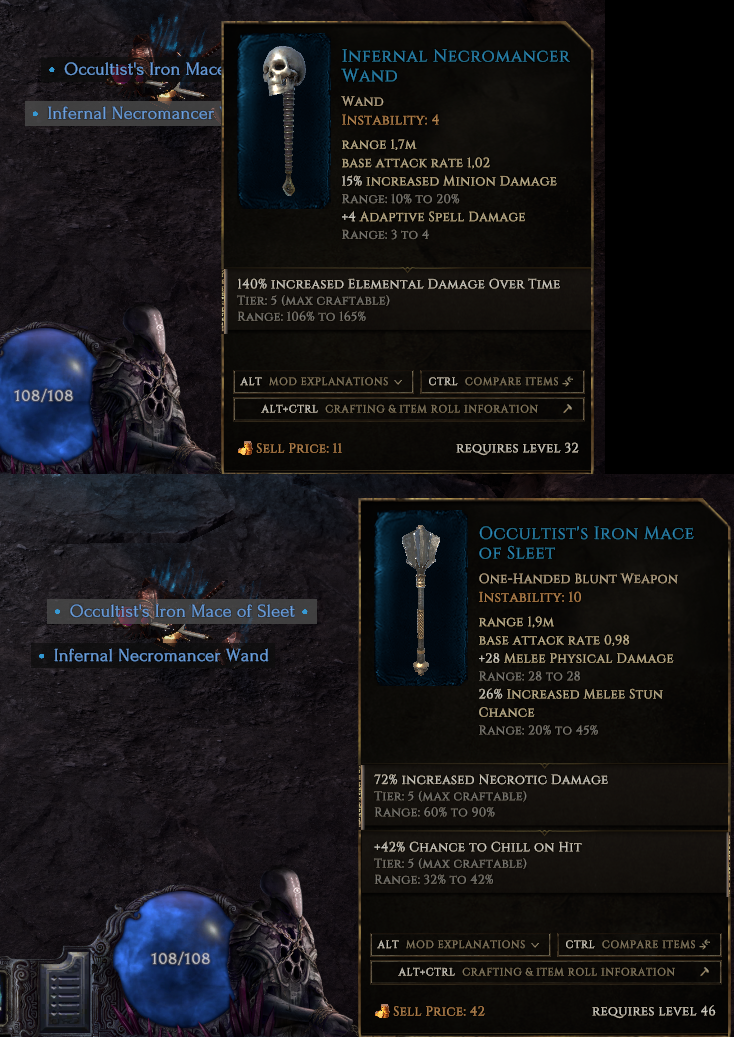 First Rule gets checked against all Items on the ground, only those 2 here have a Tier 5 affixes.

Those 2 Items, that match this FIRST rule, will not get checked against ANY other rule below. Neither any recolor nor any hide rule.

If we now disable all rules (or alternatively you can temporarily disable the Loot Filter by pressing „X“). We can see there are alot more Magic Items on the ground.

If we now swap the order of the same rules, we will see nothing, since ALL of the Items on the ground will 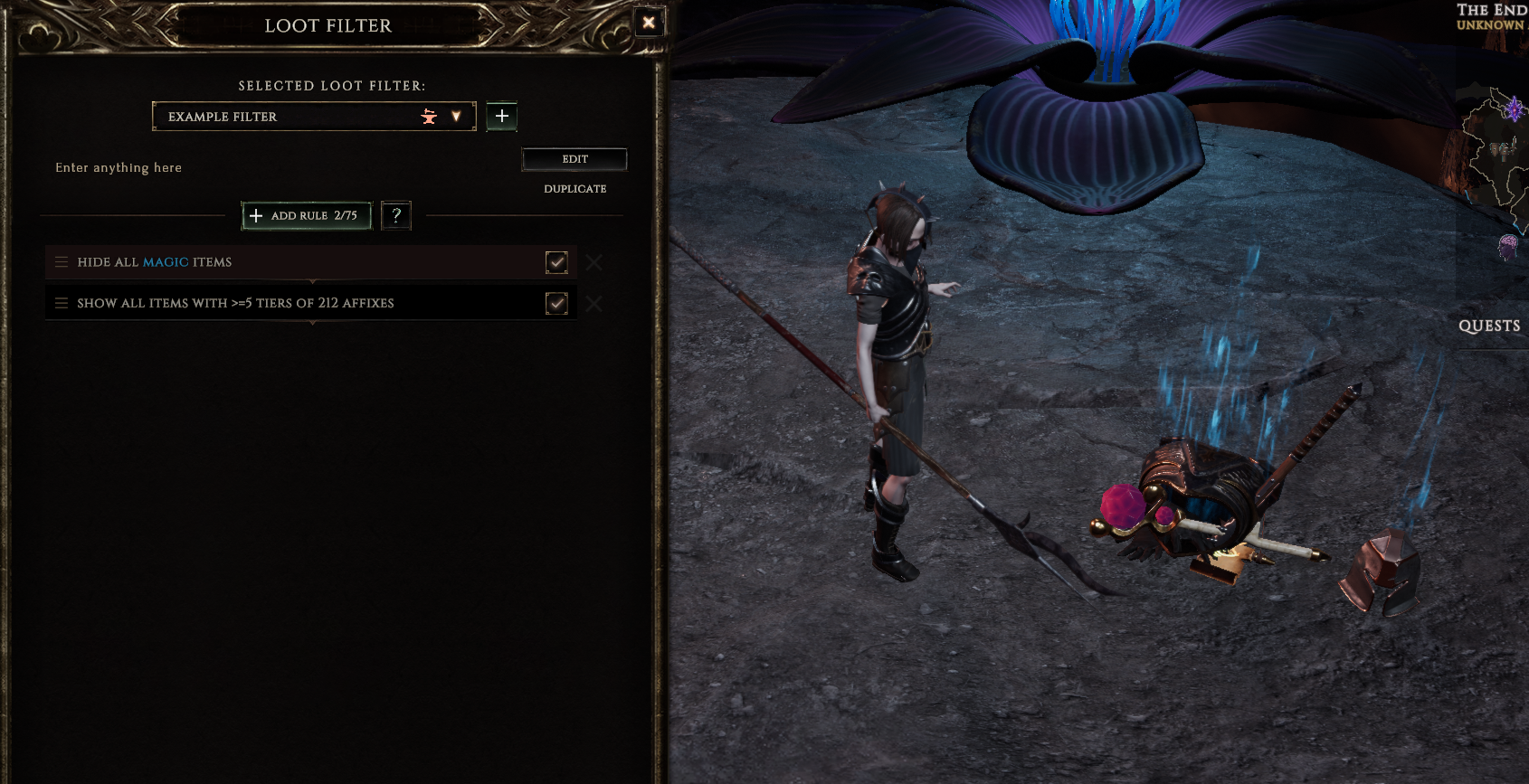 Since ALL Items on the ground already match the very first rule, no other rules will be checked.

It really does not matter how complex the Loot Filter is, how many rules you added, this basic functionality is always the same.

How to set up your own Loot Filter

So i would say there are generally 2 different methods of approaching the creation of any Loot Filter, both will kinda meet at the same point somewhere. One of which is way less punishing if you make a „mistake“ or forgot something, the other is way more advanced and i would not recommend for any unexperinced player. Even while being easier and faster to setup.

First Method(rougher): Recolor Things that are particular important to you, then hide things that you are 100% certain about, that you don‘t want/need them. (If you are unsure i would not hide them and first try to play with the loot filter a bit, before hiding too many stuff)

Second Method(very deteministic): HIDE ALL, then deliberately show stuff you want to see. I would NOT recommend this to any new or fairly unexperienced player. Even for Veteran Players i would advice a very high portion of caution.

So let‘s start creating our very own Loot Filter from the start.

For this i will take an example character as a rough guideline. We will do this as a Void Knight Erasing Strike 2-Hander Melee Void Character, fairly obvious choice here.

We want to recolor all affixes that are potentially usefull for us. I personally like to recolor offensive and defensive affixes in different colors, but that is preference.

Let‘s start with the offensive ones: We create a new rule: Visibility Recolor; Condition: Affix;

I will select any affix that at least has some offensive value for me, even if it‘s not THE best in it‘s category.

Note that i will do all „gear affixes“ in one rule and we will then later create another rule for Idols, since Idols do have no Tier within their affixes, so we want to treat them a little bit differently. 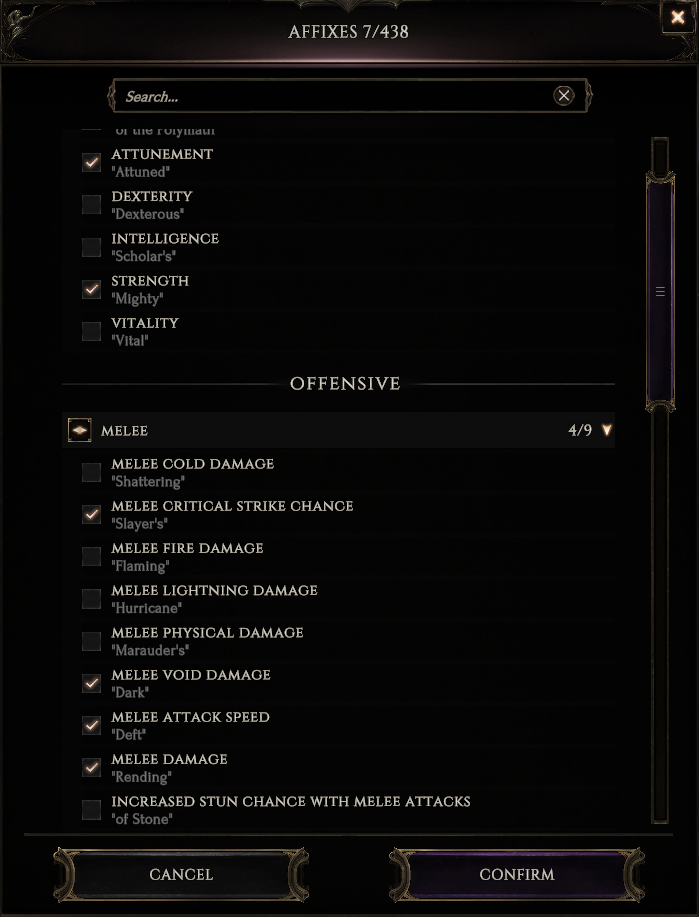 I would always tick all of those „Flat Melee Damage“ from any type, since that is really valueable, regardless of what is you „main damage type“. For very late endgame you can further fine tune that.

Just to stress this again, if you are browsing all of those affixes and you are unsure about any affix, just choose it, you can later edit those rules and fine tune them.

Now we will add a recolor rule for all kind of defensive affixes in another color.

If you know you want to play with a shield or more bruiser like, you could also add all the block stuff.

Now we add another recolor rule for Idols with yet another color, here we don‘t want to differentiate between offense and defense, since idols come with wanted affixes kinda rare anyway.

If you are uncertain about what skills you want to use exactly, tick more affixes than neccessary, for all those specific class/skill affixes. 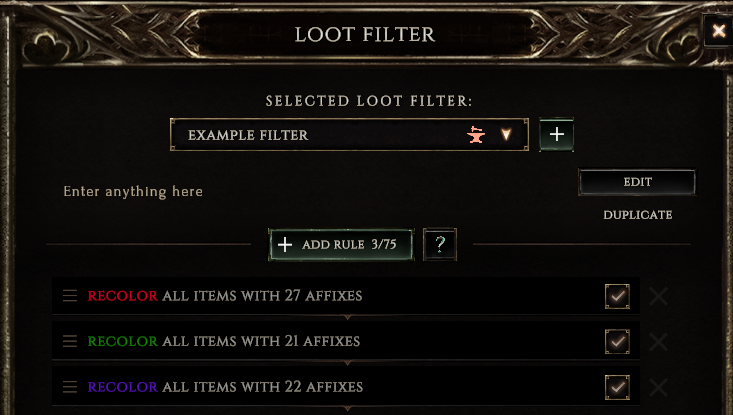 The order of those 3 rules does not matter at this point, the only thing that would change anything, if an item drops that has affixes from the green and the violet recolor rule. In that case the item will have the color of the TOP Rule.

Next step is hiding any affixes that you will never ever want. If you are uncertain, just leave them. JUST select affixes you are sure about.

You will want this rule to be BELOW all of your previously added recolor rules. Because if an item for example has 3 desired affixes, but 1 affix that is undesired, the hide rule would hide it, without any of the other rules applying.

Now we could hide class-specific gear not for our current class.

This is done with one simple rule: Hide Class Requirement: Primalist, Mage, Acolyte

You want this rule to be at the very top, to not show items recolored from you other rules.

Now we think about if we potentially want to collect rare gear affixes or idols for shattering or using on alts.

I would recommend a recolor rule in yet another color to make them distinct, so you immediately recognize them as „shatter or alt“

This step is entirely optional, if you do not intend of collecting loot for alts or playing solo mode anyway.

I would put all class specific affixes in there, also the idol ones. Here you could also make 2 different rules for gear and idols for later fine tuning.

We want to put both of those recolor rules below our previously created recolors rules for our desired affixes, but above the hide undesired affixes. 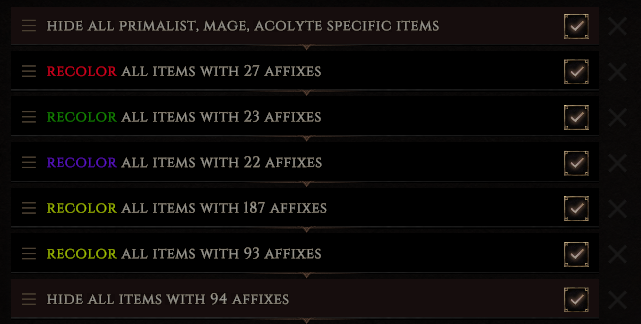 As the next step, we want to hide all base types that we have absolutely no intent in using. For our 2-Hander Void Knight, this means i want to hide all 1-Hand and Off-Hand Weapon Types and we also have no intend in using a staff here, so even the 2-H Staff base Type can be selected for this hide rule.

This rule should be at the very top, since we have no intend in using them, even with good affixes.

All we have done so far, is just a very rough loot filter, this is not even close to strict, but does most likely not deny you any potentially valueable loot.

To make sure we always see Uniques/Sets/Exalted we can put an show rule for those rarities at the very top, above the hide rule for some of the weapon base types we did hide. Otherwise uniques of those base types would be hidden. 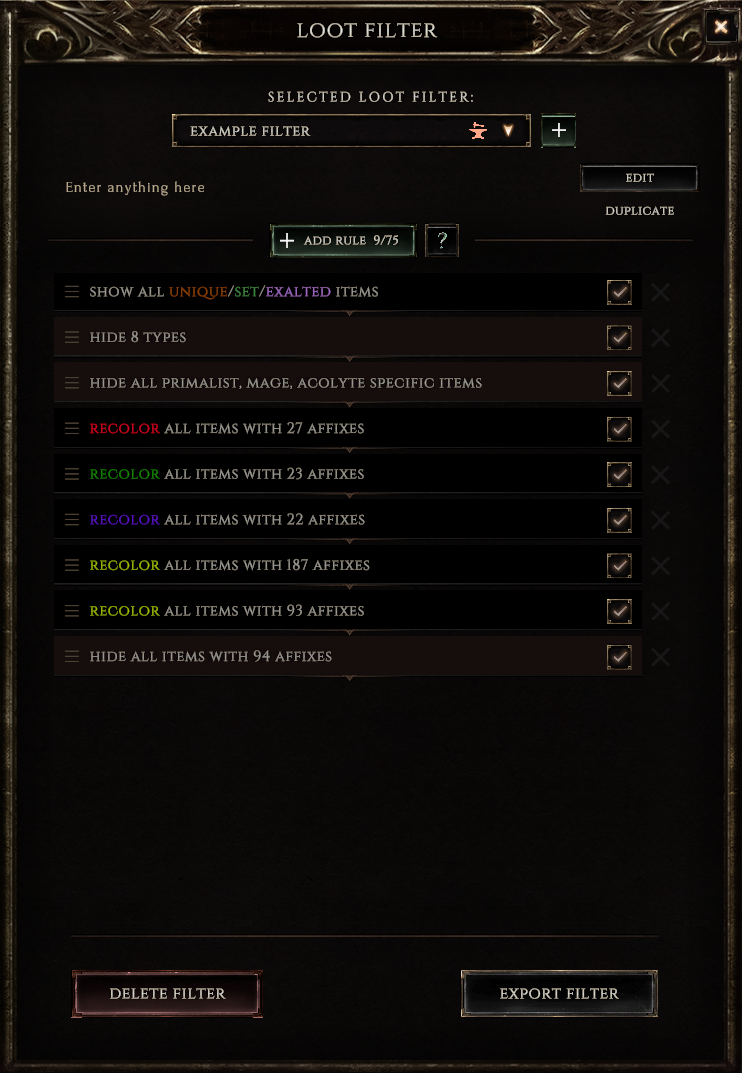 For fine-tuning and making the Loot Filter more strict, you can add affix tier conditions to all the recolor rules, depending on how far you are in the game yet. That was the reason i did the Idol Ruels seperatly, because Idols just have 1 Tier.

For different builds, the selected Affixes of course differ, but i hope you got a general sense of how i personally appraoch most of those more basic filters.

I feel like making a guideline on the second method is not very helpful, because using this method, you should bee 100% certain about what you are doing and what exactly you need. And that is very very build specific.

Even the First Method i showed you on those examples is just arough guideline on how i personally begin to set up a Loot Filter for a build, where i am not 100% certain yet what exactly i want.

For people interested here is the example loot filter we just did create:

I am not sure if this Wall of text is even remotely helpful for some people, but there might be some people i helped with elaborating this kind of filter step by step.

You can keep all spelling, grammar or other mistakes that you find!

The first rule is all everyone needs to know: the top filter always prevails. Once people understand that the loot filter starts to make sense. Great job explaining it. I feel like EHG should visualize this concept somehow so people can understand without being confused.

Ok… No more questions about loot filters… @Heavy has answered them all above.

That’s all i wanted to achieve. Mission accomplished!

This is as fantastic as your actually sample casual filters!

Do you know if it is possible to highlight an item only when two or more affixes are on the item?
Like when i have a rule which filters staffs and i only want to show staffs which have 2 out of “lightning Damage”, “Spell Damage”, “Elemental Damage”, “Crit Multiplier” …
So far I didn’t find an Option for this but could be very handy for late game!

Thank you very much

Do you know if it is possible to highlight an item only when two or more affixes are on the item?

That function is currently not available, but i already did make a suggesstion thread with this and some other more advanced stuff here
Feel free to give it an upvote or write your own suggesstion in there.

This is as fantastic as your actually sample casual filters!