Detailed Description:
When using Wandering Spirits there is an extreme interference in controlling the movement of your character. The interference seems to ramp up over time. Character goes from moving perfectly smoothly to stopping and starting seemingly randomly.

What were you doing at the time?
Leveling through the main story and playing the game in general.

How consistently does this happen?
Every time. In the video below I space out using the skill to show how reliable this bug is, causing it occur twice.

Other Information
When asking in chat, one other user immediately responded saying he/she experiences the same issue. There is also an old, closed, bug report for this issue however it states the issue is present only with the “Spectral Putrescence” node. I experience this issue even without the “Spectral Putrescence” node active. See the end of the video for Wandering Spirits skill tree. 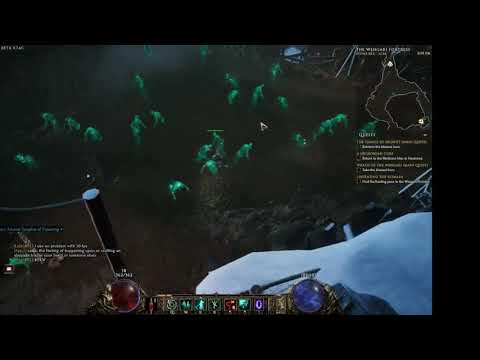 I’ve been trying stuff lately with the skill Wandering Spirits, and since i unlocked the passive node Spectral Putrescence, the game has been a complete mess for me : huge stutters happens when i’m using the skill, my character is not able to move or in a choppy way, which is very bad : i can’t dodge/kite mobs or even move in the game.

I had lag issues with my void knight, because of the number of projectiles and particles that were on screen killed my fps , but i could move, it wasn’t hindering my movements, just dropping my FPS.

If you need any information about my hardware and software, i would be more than pleased to comply

We expect Patch 0.7.7 to improve the situation, though further work will be needed. I’ll just move this thread from #technical-support to #bug-reports as this happens to be a game issue.

Thanks you for your quick reply, your team is so efficient and passionate

I can’t wait to see the improvement you’ve made on 0.7.7 then

I was just going to do a bug report on this and see it’s already been reported.

In patch 0.7.7b the problem is so bad I’ve stopped using my character as she gets blocked by the spirits and walks on the spot for 2-3 seconds. The only way to move around is using a movement skill but as they are on a cooldown it’s a death sentence to use the spell with that set-up.

A screenshot of the specializations I chose if it is any help:

Thanks-- we do have another fix planned but it’s a larger technical change. Unfortunately I don’t think it will be resolved in a hotfix patch for 0.7.7.

For now it seems having less spirits/minions reduces the problem, though I recognize that isn’t a good option.

Was just about to write a bug report about this very same topic.

Will this issue be resolved in 0.7.8? only this stuttering while trying to move makes character unplayable. Unless you don’t mind being killed, without you making a mistake!

And yes having less spirits isn’t really a fix! That’s like a swordsman cutting his sword wielding arm off

EDIT: At the time of writing this comment I was also using the Skeleton Warrior Skill. I have removed this Skill from the action bar, and the hop, skip and stop appears to have stopped. I don’t know if these skills are relevant to each other in some way, or if it was just pure coincident, but thought I would mention it.

EDIT: Just selected Wrath Bringer in the Lich tree, and notice it does the stuttering with these to. So guessing having any other minion with the Wandering spirit causes this stutter movement bug!

NOTE: Been watching my task manager whilst playing. To see if there was some issue on my PC. CPU runs at 10% - GPU runs at 30% - SSD is on a M.2 socket which has a max speed of 35gbps - Ram is only on 7GB and that includes OS etc. There is no technical reason, for Wandering Spirits to be making my characters movement so…well bad

Attaching to this bug report.

I see this issue as well. It should be noted that I do not see the behavior outside of the Monolith.

Leveled my Low Life Lich in Arena until level 76 and everything was fine.
Started to do monoliths to farm up gear and the stuttering movement has begun.

Detailed description:
My character is being stuck in place during gameplay like my character is just walking in place. It happens a lot in short occasions that makes pathing very difficult. This occurs when I’m playing my Lich but I did not try if it also occurs while playing my Druid. I think this is caused by casting Rip Blood then moving after. Usually I cast rip blood once then move a little. I repeatedly do this a lot of times during my playthrough. Although, I am not sure if it is also caused by the other spells I use. Spells that I use are: Rip Blood, Mark of Death, Transplant, Wandering Souls and Soul Feast.

We believe this bug is caused by Wandering Spirits specifically. We have a planned fix, but it’s a larger technical change that likely won’t be in a hotfix patch for 0.7.7. Sorry for the trouble!

I’m testing a necromancer build with Wandering Spirits. Almost each time I’m casting this skill, i’m kind of “lagging” as if my ping was very high. I can’t move or cast properly.

Is someone experiencing the same problem ?

Same here.
It kinda feels like the Spirits are obstracting my path or somehow screwing with the character’s pathfinding. It’s especially annoying in narrow pathways while it’s no issue in wide open maps.

Sorry about this! We’re aware of the issue and have a solution planned. However, it requires a larger technical change so it’s unlikely to be ready for a 0.7.7 hotfix, unfortunately.

was going to share this bug, but it was here already…

oh well, since I had the trouble of making the video, here you go

Keep up the good work

I thought, game needs connection to server and its lagging

Kind of glad its not, will put aside this build for later. After get 40% more often spawn ghosts character becomes pretty unplayable.

Whether it’s lag or some other defective mechanic, using wandering spirits is making the game unplayable. My character is constantly delayed in responding to actions while the skill is active, sometimes running in the same spot for up to 2 seconds before finally moving again. This has resulted in death far to many times and is frustrating me beyond belief.

After the nerf to Aura of Decay my build is now relying on this skill significantly more than before. So at the moment other than being forced to create a brand new character, the choices before me are to either not use it and do barely any damage since the “fix” to aura overreached and killed the skill completely, or use it and attempt to deal with the lag which 70% of the time kills me. I’ve noticed this issue even before the aura nerf but since aura was so powerful I barely had to use spirits. Please don’t follow in the footsteps of the Wolcen devs by focusing on nerfing skills instead of bug fixing. Although nerfs and balance fixes are certainly necessary, bugs like these are far more frustrating to deal with than an OP skill and should require more immediate attention.

This is also not just an issue on my end since someone else, on the build I was following, also complained about this issue. From what I’ve noticed my frames are not dropping either so it doesn’t seem to be an fps issue. The game isn’t freezing, my character just becomes unresponsive.

This is a known issue, apologies for the negative experience! We have a planned fix for this, but unfortunately it requires a larger technical change for the skill to be fixed properly, so it likely won’t be ready for a 0.7.7 hotfix.

To address your point about nerfing vs bug fixing-- in 0.7.7 we made some technical (not balance) changes that inadvertently made Aura of Decay far stronger than intended, completely trivializing content on some builds. By fixing the bug, we returned the skill to the power level it had in 0.7.6. We’ve heard the community feedback that Aura of Decay doesn’t feel strong enough for the investment you have to put in, so I’m sure we’ll revisit it in the future.