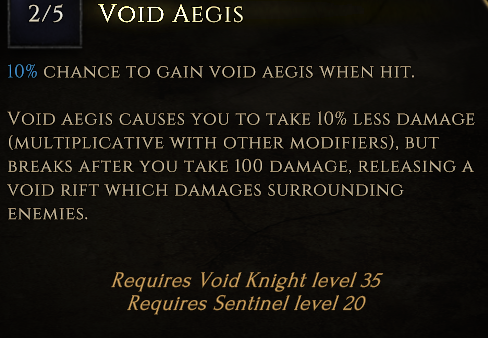 the problem is that even though it can proc quite often the damage reduction isnt scaled per point invested and the 100 damage bar is reached easily in one or two hits at higher levels. The damage caused by the rifts is then minimal so its essentially a dead passive as there is no benefit for investing in it.

Can the 100 damage bar be increased so that it provides a damage reduction for longer along with raising the damage threshold for it to break. It would then feel like a better defensive investment passive.

Perhaps increase the damage cap per point going up to 500 at 5 points?

Just make it %health based

I played around with this skill last night just walking up to single mobs that couldn’t out damage my regen and I found it to be, well, odd. Sometimes I’d get hit for well over 100 points and it would never fire, eventually timing out. Other times it did seem to fire when I took 100 points of damage.

I think what was happening in the first case was that it was re-applying Aegis from subsequent procs. I can’t really think of another reason why it would behave like that. I agree with you that when it does fire, the damage is laughable. My VK is using a staff for increased base spell damage but it doesn’t seem to have any effect on this passive. The damage reduction is pretty laughable too. I quickly re-specced and got rid of it.

If the damage reduction was better, say at least 30%, I might consider it even with the pathetic damage it does. In it’s current form though, not a chance.