Thoughts on a Lightning Disintegrate Build?

Ive been thinking about trying this out but i figured i would see if others have tried it first and how it worked out. I was thinking about going Disintegrate, Black Hole, Lightning Blast, Teleport, Flame ward. Let me know if this is a bad or good idea and tell me why

Desintegrate was not in a very good spot before patch 0.7.8. It got some buffs, recently regarding damage. But I don’t know how the new mana drain works on it.

It’s been a while when I specced into this. So maybe some things changed since then. But here are my thoughts:

Damage and Resistance while channeling are your main affixes then. Theres a Ring Liath’s Signet, that grands 100% GB when channeling. So you don’t need GB on items.

To maximize damage output with Desintegrate you want to use the right side of the tree with the “upgrade to a higher tier” nodes. So the longer you channel the more damage you do.

The mana drain and the cost of black hole both will eat your mana in seconds. So I’d suggest you put Focus into your load out. Also I am not sure if black hole is the go to cc spell here. It has a very long cooldown. You have to invest a lot into cooldown reduction (top of sorcerer passive tree and on teleport) to make good use of it. Maybe Snap Freeze is a better alternative. It freezes for sure and has a relatively short cooldown.

Also it might be a good idea to invest into the cold passives that freeze enemies around you when you get hit. As a channeling character you will stand in place a lot what makes you vulnerable.

Channeling abilities are hard to play endgame wise because of their lack of mobility. With Myltiplayer this might change. Solo it’s hard.

Also my opinion us that if you wanna go the channeling route with Lightning that Lightning Nova would be a better choice than desintegrate. More damage, significantly larger aoe.

I play my Lightning mage with nova and blast. Nova for creeps, Lightning blast for single targets (with convergence and hyper charge you will melt every big guy in seconds). In addition I have focus, teleport and flame ward.

Yes, you can proc Lightning Blast with Disintegrate. My main disappointment with Disintegrate is that it’s got the DoT tags, so it can’t crit, nor can it proc ailments outside of it’s skill tree. Plus the combination of range/aoe & damage was disappointing when compared to other chanelling skills like Ele Nova.

I don’t know if it’s just me, but Disintegrate feels a bit underwhelming. I’ve been using Elemental Nova with the channelling node & that feels pretty good, it hits pretty hard (with a staff), you can tweak it to use any elemental nova (I went with all 3), it works really well with Dragon’s Breath/Dragon Mage & it can have a massive AoE. Disintegrate on the other hand does not. It’s a dot so it can’t hit & therefore can’t crit or proc ailments outside of it’s own skill tree (Elemental Nova ca…

I’ve not tried it after the changes though.

I’m not the most expert player, but I’ve been eyeing Disintegrate for a while now. It’s not a super popular spell, so there’s a lot of unexplored build options. While I haven’t played around with it since 7.8 released, here are, in no particular order, some things to look out for:

If any of this has been useful in any way, I absolutely do not believe you. Lemme know how it goes! Genuinely eager to find out.

The problem with Ignivar’s head:

Wow I just came across your comment and I’m starting a disintegrate build now. So much information! Thank you!

This is a lightning version of disintegrate 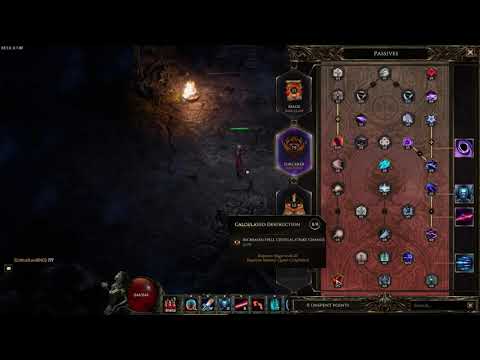 Hey man I love watching your videos! Thanks for all your contributions to the LE community and keep up the great work

Just jumping in to say I got a lightning disentigrate mage thats super fun I love it.

Its primarily using disentigrate to generate mana and procc lightning blast and give 35% dmg reduction while allowing us to profit from 100% GB (unique ring) and ultra protections (protection while channeling suffix).

Main dmg source beside first lightning blast is Static specced into lightning blast as well, generating static points when hit (which we will be a lot but we can take it) and some points into +25 static charges, more charge when moving and “shock enemys when hit” on the left side.

Then we take the new skill that locks you in place (which, frankly, we’re anyways locked in^^), specced into +% spell dmg and guess what: lightning blast. Then one can take the “no mana drain but 4 skills usable” node that reduces cooldown to 2 seconds. We also want that 250% shock chance since we have so many lightnings around us… And we want “increased movement speed after breaking the stance” and some cast speed, since moving fast between channeling is the way to kill fast and stay alive and alert!

Add flame ward specced into full ward and dmg reduction (additional 40% and over 1000 ward) and 2 possible charges on the left upper side, or specc into more duration, less ward and retaliation and lightning damage (since we love getting hit at anyways). Also take the “cast when being stunned” node since that is literally the one thing you dont really like, since channeling is what makes this shizzle work.

Lightning blast gets procceded 3 times this way while we’re standing there, we have unlimited mana resources. I specced lightning blast into lightning aegis (another 25% dmg reduction), and quadruple cast chance, plus fork and the left middle side for dmg and crit and stuff.

with the last skill that we dont speccialize in:

Teleport - we can move freely while in the stance, without breaking it, since we are not “moving” but teleporting, so we’re remaining a “blast” so to speak on the go hehe.

Im at 220 life reg and 650 life atm, with 55-60% protections while channeling and 100% GB, and 98% crit avoidance. We want to avoid dodge since we need getting hit to recharge static and procc some stuff. Atm 30% crit chance. Im lvl 65ish, so with upcoming equipment I will add another 150% life reg, some more 100-250 life and im still missing those idol pieces, where you can get up to 160% chance to gain 30 ward when hit, and lots of other tasty stuff ( another 160% lightning spell crit chance). And im still missing the upper nodes on passive tree, that is 100% crit chance, 50% multi, freeze enemys around you when hit (this will be super awesome!) and such tasty stuff.

Basically you want to stand as close to your enemys and channel disentigrate and activate stance.

This will cast 3x lightning blast, with a chance to double cast or quadruble-cast… So, with enough crit, you’ll see all yellow numberd and enemys melting away!

When you need to reposition, you can teleport to the next big mob (smalls melt away anyway), and you can do this 1-2 times before the stance breaks.

Flame ward whenever you feel its necassary, or before you stop channeling to reposition (either move =ultra fast due to “movement on stance end buff”, or teleport), because thats when you’re actually vulnerable (stop channeling).

With 100% GB, crit avoidance and protection while channeling, you’ll have a good feeling for how your health is performing, and with 200-300 life reg/sec or so, there’s little surprises for you like big one hits or smth. When there’s lots going on, its literally best to stand there and dish dmg and flame ward than to move an inch and break the channeling/stance.

Add some %of dmg leeched and you’re even more fine (which I havnt yet).

I crit for 1,5-3k each blast, and I’m only 35 points into the sorceress tree and yet need all the +adapt spell dmg and the +crit multi nodes, and yet need to craft me a good high lvl staff… Rest of my gear is T16-18 with most T5’s and one T1-3 on each piece.

Might add a video when I have time and some want to see in action! I love it

Its super fun, it kills