I played a build utilizing the Rotten Core node months ago (before the visual update to it made it a GPU eater) and had moderate success with it despite there being almost nothing in any of the mastery trees to improve it. I revisited it again because the passive trees have been updated since then and the Ice Thorn Totems node details that it converts the poison pools into an Ice Vortex, which scales with increased minion spell and cold damage.

Well, Shaman has decent sources of both, a good 100% increased minion cold/lightning as well as added minion spell lightning and a nice chunk of adaptive spell for minions.
The result is that even with an extra 100% increased cold/lightning damage and a 36% more multiplier from within the Thorn Totem specialization tree, the Ice Vortex deals less than half of the damage the default poison pool without those benefits.

Dropped the ice conversion in a heartbeat and saved myself 10 useless mastery passive points.

you can get over +20 base minion adaptive spell damage between Tier 5 chest and helm
With 4 idols that proc thorn totem on hit and your getting 5 totems at a time, you can stack tens if not hundreds of ice vortexs on top of each other, of course youll likely crash the game.

You can get decent damage out of it if you completely build around it and synergize your skills with it, add to it that you can use 5 other skills on top of it (dont have to have thorn totem on the skill bar for idols to proc it) you can get a really heavy dps build going.

I know, that’s what I’m doing. just lamenting the fact that the ice vortex is hilariously bad in comparison to the poison pool despite having more scaling options. I also just remembered I have 8% cold/lightning penetration for minions too and the ice vortex is still half as effective.

The are much less of a burden to render than the poison pools, I’ll give them that.

Well, poison being strong has always been a problem due to poison getting 5% increased poison damage taken (from memory, it gets reduced every few patches).

The pools aren’t directly affected by that as they aren’t applying ailment stacks. I assume any poison stacks a target might have would increase that damage though, but that’s not relevant to the results I observed with just the damage of an ice vortex compared to the pool it’s converted from. If anything that simply puts the ice vortex even further behind.

The poison clouds do apply poison and you can get hundreds of stacks if your proc n maximum amounts of poison clouds in hit. Which means there getting at 100 stacks a 500% damage boost.

I just tested the ice vortex and im curious what laughably bad damage is? I was getting 1000 damage ticks against abomination with them which already seems incredibly high for an after effect from totem death 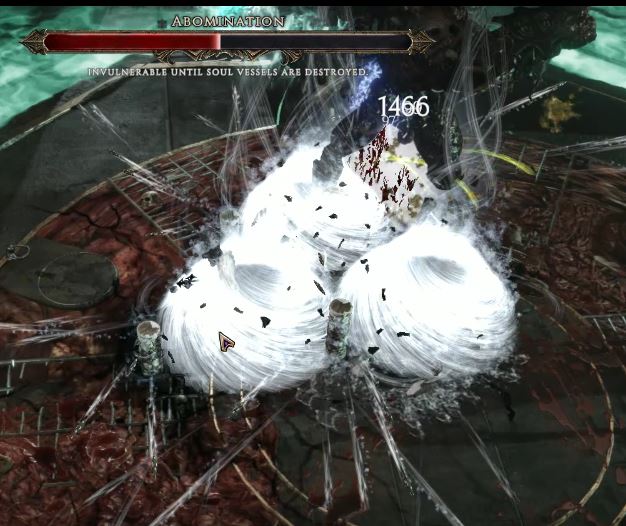 And i dont have level 20 thorn totems yet, only proc n 3 totem instead of 5 at a time atm.
also he’s only standing in 1 maybe 2 of the vortex, getting him in the middle and being hit by all 5 would be even more crazy damage

I should also add that abom fight is a single target. More targets means more pros with even more damage.

This is not a thread about how crazily you can spam out totems to generate damage.
It is a comparison between the default skill and when it is converted to cold.
Despite having more stats to scale off of and even when one has more increases and multipliers the ice vortex deals less than half of the damage of what you convert it from.

If the poison pools do apply a poison stack every second in addition to their damage that’s news to me as they do a constant amount of damage every pulse. If each pulse applied a poison stack I imagine you would see the damage increase each pulse until the first stack fell off, which I don’t observe in testing.

This is not a thread about how crazily you can spam out totems to generate damage.

Weird, I was under the impression the entire thread was about how bad the damage was and how it needed buffed so I showed you how it can actually be decent and a buff would only intensify how broken you could make the damage if you decided to actually build fully around it. Perhaps giving a cool down to reduce soaing totems is in order and a buff cam be applied.

Not all skills are just about the damage. Ice totems come with other benefits.

I give up, my opinions are clearly inferior to yours and my verbage is not to your liking.

Neither of which is true.

Can you show me your setup?