A One Minion build using Entangling roots and Frenzy totem 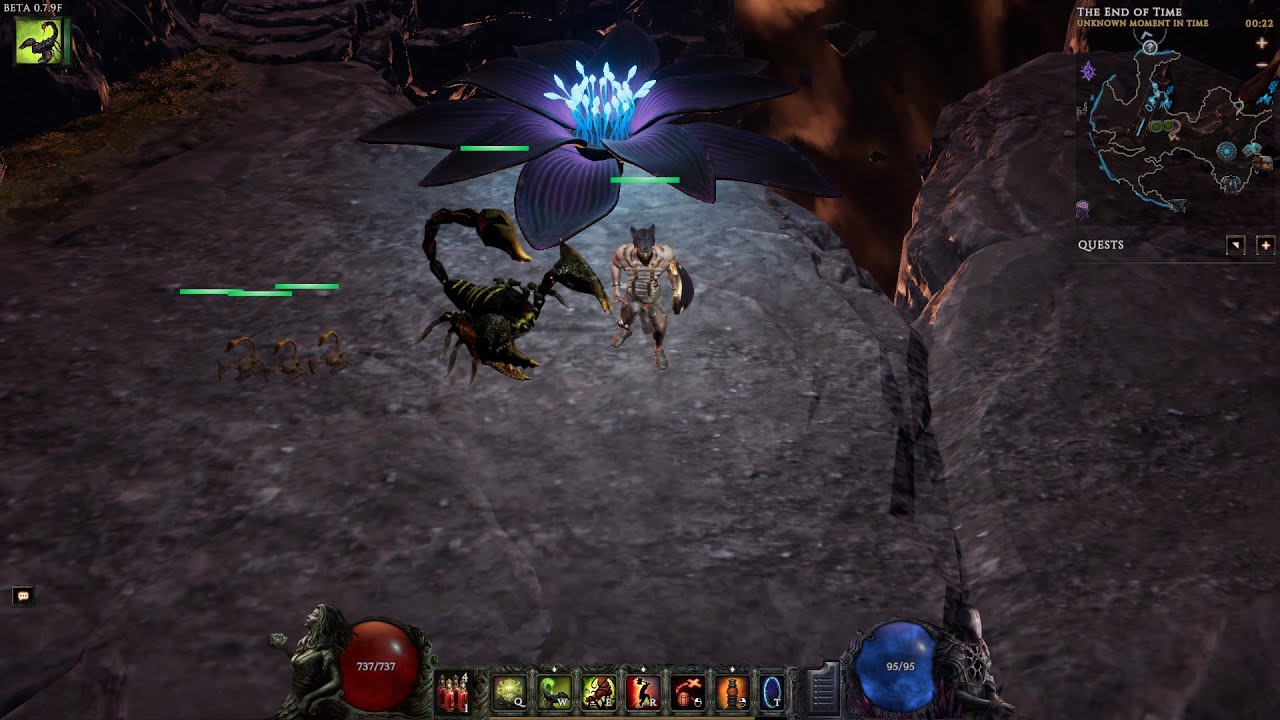 Note : Didnt beat Lagon in Monolith, because the baby scorpions wont attack him, and they are our main source of damage. But if you wanna beat him i guess a solution could be to respec the scorpion (its quickly done at this level) and spec out of baby scorpions, and take nodes that buff the scorpions damage instead. Or maybe equip a weapon like Draalsting.
Also i didnt beat the Emperor yet, but i guess thats not the build failing, but rather me being too slow

It’s nice seeing some additional 1-minion Beastmasters out there. I’m doing a similar one myself, but with the Raptor instead of the Scorpion.

Just for the sake of gauging my DPS numbers right, what sort of damage ticks should I be looking for on the Dummy? Being a one-minion build isn’t going to have the DPS that a multi-minion build would have, but seeking some other builds doing 20K each attack has me worried that I shouldn’t continue bothering with such low DPS.

what sort of damage ticks should I be looking for on the Dummy?

The baby scorpions can’t target the dummy, so it can’t be used as a guide for the scorpion king!

Thanks for the guide, but I’m confused about your passive and skill choices:

For the passives you didn’t take the minion poison chance - which synergises so well with the baby scorpion attack speed? You took a lot of nodes in strength, which I believe doesn’t affect the baby scorpions - only companions.

@Tree Cheers, ive been trying the raptor too, but didnt really work to well for me as i felt i needed more distractions, but with the scorpions and the 3 scorpion babies its like having 4 minions and still get the benefit of the 1 minion nodes.
As Grimlock9999 pointed out i cant say what kind of damage numbers to aim for as the babies (which are main source of damage) cant hit the dummy, and the Scorpion itself is really low damage (something like 200 normal attack and 1k tail hit i think). The 20k on your raptor doesnt sound too bad, but i havent tried the raptor in higher Monos so cant really say.

@Grimlock9999 Hehe i completely understand why you are confused about all those things, because i had been testing and respeccing all day to try something that worked for killing Lagon, and i failed to respec back to original build before posting, sorry about that. I will be posting the right build soon

You took a lot of nodes in strength, which I believe doesn’t affect the baby scorpions - only companions.

I choose 10 point Ancient might node in BM for the +10 minion melee physical damage, and 1 point in Primal strength to get to the Survival of the pack node

For frenzy totem you didn’t take the poison nodes next to the life regen node?

Baby scorpions get +40% from their Temper Tantrum skill and +60% from Venemous Pack (that is when i post the original build), so i think the more life regen is better. Also i didnt wanna invest much in poison in this build as i dont have much Dot minion damage.

For entangling roots, you didn’t take the poison or attack speed nodes which juice up scorpions immensely?

That will be corrected when i post the right build

Eterra’s blessing you didn’t take the poison chance for scorpions?

I focused more on just getting 100% for the babies, and not really much for the scorpion itself, but as im still testing some things it might change.

there’s no reason to go for poison-based builds if you’re not going to scale the poison damage… i’ve played a variation on this using serpent strike and the unique polearm Draalsting which is extremely good at both clearing and bossing… the big scorpion and the babies are both pretty good for clearing but for the single target to feel good you really need to be dealing some damage yourself.

Draalsting has enough %inc poison damage for you so you can focus on %inc poison/damage over time for minions in your other gear slots, and the tree has plenty of nodes that work for both you and your minion.

serpent strike has the added bonus of a node that gives you dodge rating for each attack you’ve made recently, so it adds a layer of defense as well. it’s a really strong build. i’d suggest taking a look at thyworm’s version, seeing what you’ve done differently, and maybe consider making some changes to better fit the archetype you’re aiming for.

edit: i had a thought which may not be necessary to mention, but i just want to make sure you know that there’s no cap to ailment chance in this game. getting 100% is just the beginning, because having over 100% gives a chance to apply 2 stacks, 200% guarantees 2 stacks and over that has a chance at a third, etc. with the way poison scales off itself you want your poison chance to be as high as possible. (each stack makes the enemy take more poison damage, which also has no cap. even though this aspect of it was gently nerfed in a recent patch, it’s still extremely strong). sorry if i’m telling you things you already know, but based on your comments it sounds like you think 100% chance is “enough” so i thought i’d mention it.

I rolled a Serpent Strike BM, using 1 raptor, Draalsting. I have 76% dodge, 1.6k HP and 4x ‘Aspect of the Viper has xx increased effect’ basically i have nearly double effect of Viper

I think im stacking about 70-80k poisons on the dummy. Still a huge nerf from months ago when Wolves/Raptor could deal 450k poison ticks

@VapingNeckbeard Thanks for the input

Yep the 100 % i get to the babies are from Temper Tantrum (40%) skill node that also give some hit damage to them, and the 60% is from a prerequisite node in Entangling roots that lead me to the attack speed node, so didnt really go for poison, but the nodes were nessescary

Thought about this, but wanted to make a build focusing 100% on the minion(s), and didnt really wanted to get in close myself, but rather have the freedom to run around with a shield avoiding getting damaged (also mostly because my res is kinda low).

but for the single target to feel good you really need to be dealing some damage yourself.

I do feel my single target damage is in a decent place, and hopefully it shows when i update and post the right build (instead of the wrong one i posted)

I will, Thyworm makes some great builds, i do have a Serpent strike BM too that works well, but im sure theres some things i could use from his build

Yep i know, but thanks anyway

@Shrukn : Thanks for the input, i have a Serpent strike BM too that works very well, but wanted to make this a different build, however i do consider using the Draalsting to fight Lagon, since i dont think i can find another way to make this build kill him

This is what I’m doing as well, but I’m still very new at building for end-game, so I don’t have a lot of good gear to help me along. I guess the strategy is build for HP since protections won’t work as well since you have to account for all of them? Gearing has been especially frustrating for me as I feel if I try to improve one piece, I lose something with an important resistance which would set me backwards rather than forwards. I guess it makes sense to go HP first then resistances later, but I really haven’t had the foggiest idea how to ensure I don’t lose too much HP in one chunk.

I Updated the video (new video, new skills, new passives) that is if anyone is interested after seeing @boardman21 steroid version of this