Simple guide for monolith and how to get arena keys

Personal choice (won’t recommend these but can’t say they aren’t good either):
Enemies have additional armour and protections equal to % of their health. 20/10

Try to avoid:
Enemies have additional armour and protections equal to a % of their health. These enemies are harder to kill and the modifier doesn’t provide that great of a boost.
Rare enemies have shock chance. 10/5 Significantly increases the damage done by enemies and it provides a small bonus of only.

Never choose(unless you’re playing a build that doesn’t require an actual hit to do damage):
Enemies have a chance to dodge. 15/7 The “chance” to dodge seems to be like 50%. I did a double dodge monolith once and it took me 30 mins to clear. The modifier also provides smaller IIR and IEG than the others.

How I stack monolith buffs for maximum gain. This is the best way in my opinion, other people will tell you differently it will up to you what you want to do this will only provide new players an idea of how the system works. If you are farming arena keys and don’t need loot drops just reset your monolith every 5 timelines. Will keep them easy and fast to complete.

Always choose larger bonuses (see above) over lengthier. IE “Enemies have increased movement speed and damage” for 4 timelines over “Enemies heal while not taking damage” for 7 timelines. This will allow you to get a higher timeline streak and therefore get high bonuses (as seen in the picture below). 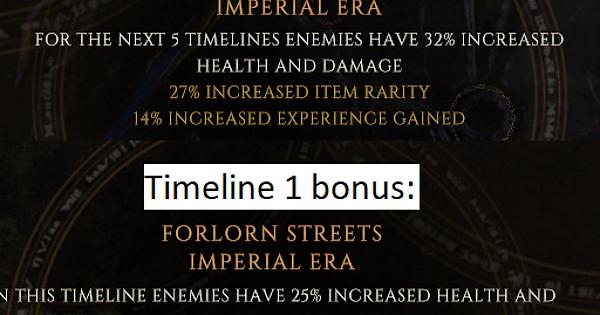 Every five CONSECUTIVE monoliths will provide an arena key. Meaning you can not reset your timeline, it HAS to be 5 in a row. Some players claim they can drop on their own occasionally but I can neither confirm nor deny this.

The dodge on enemies is one of the worst mechanics they could have came up with. It has no counter and its not consistent with how dodge works for the player (the player cannot dodge DoTs but the monsters can? Why?). The only credible reason I can think of is that there must always be a modifier which no sane person would want to choose.

there is the poison aura that the lich gets that cant be dodged im told.

I hate it as well but in my eyes this makes it the best steroid enemys can have. It’s the most frustrating thing if your skills need to hit for regen and stuff and when they dodge you got a bigger problem. I like very much on the other hand because it’s very meaningfull and ramps up the difficulty quite a bit.

sure it gives more of a challenge as you mentioned but the reward doesn’t match the difficulty making it not worth even considering doing it.

Something i run into but, not till i was almost 70 completed…

Be very mindful of combining some of these mods together when you get really high completed count built up. You combine things like Regen with the Enemies have additional armour and protections equal to % of their health mods and especially if you begin to stack them… you can and will possibly create unkillable rares if you happen to lack damage. Im sure this isn’t such an issue for 2H and builds or Crit builds but, regardless it is very much possible to create rares that can not be killed.

I happen to spawn a rare from the Forge you Cleanse at the end of 68 completed and the rare regen health faster than i could deal damage to it. Making the monolith impossible to complete and thus being forced to portal out and lose all that progress and have to start all the way back over. Pretty sure i also screwed up and had a dodge mod in there but there were so many i cant remember. I know i had 2x regen and 2x protections % of health on there.

Its also worth mentioning that mods like enemies Enrage also stack to the point certain monsters can bug out from being so fast and also make some of the telegraphed attacks some monsters do activate instantly with zero wind up.

Dodge with those kinda combinations can also help create unkillable monsters combined with Regen but ive got to the point im like Serv i wont even run Dodge anymore at all if its an option.

How did you change the skills around in the toolbar for werebear.

Yeah, exactly you build up the difficulty until your build can no longer handle it, then you just “reset timeline”. Some builds will perform better than others that’s just how it is. I personally will choose mods that increase their damage over increase their defense. Makes clearing really fast and you wont run into the cant kill them problem.

If you put the werebear skill on any slot other than right click, bear swipe will be on right click by default. Other than that you can’t. So just play around with where you place the actual werebear skill and see where each skill feels natural to you.

Indeed just another one of the many reasons why in this game building in defenses actually means something. And i love it. So refreshing coming from a game like POE.

Im quite sure less tanky builds more focused on damage can perform as well but im also sure those builds will most likely be ranged. Pure melee builds defenses are actually more important than damage to some extent so far in my experience.