Hey there, just wanted to give people some thread to show of their T6/7 items, either to just show of or maybe get some ideas flowing to work them into some kind of build.

I already found a couple of good ones, sadly all of them are on low/mediocre bases, but still very nice for midlevel chars.

That was my very first usable item and i am still using it on my main build, because i am using Harvest as my main damage sustain damage source and the “Elements Of Death” Node from harvest converts all added damage from items to necrotic. Void Melee Damage being the affix with the highest value this was pretty awesome. Item is still not fractured and i am thinking about trying to put chance to blind or chance to stun on it. 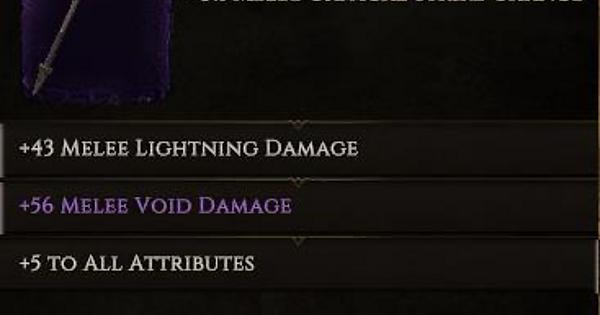 Second one i was thinking about doing some offensive VK Build, maybe Warpath 2H, since one of the new unqiues from Timelines also would support Void 2H playstyle. 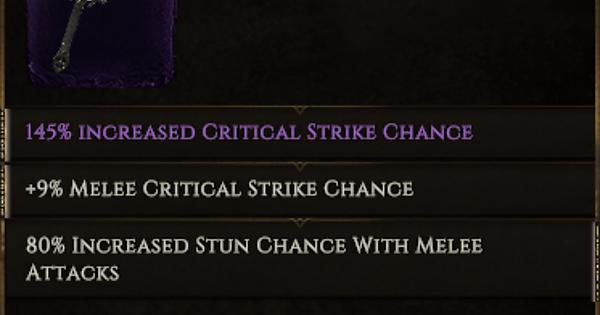 Already found a couple of ones that could potentially get very strong but those 2 are the ones that were at least synergistical and i already working with them.

Honestly think the purpl,es are so underwhelming, not found 1 that is useful, affixes just a random mish mash.

The ones I got are just junk like 95% of ALL drops in this game.

Mine too, that doesnt change the fact that they have the greatest potential and it’s even more exciting when finding some good ones.

As said above, mine have rpetty decent stats but the bases are not high.

If the Halberd would have been a Ranseur or Sovnya i would have probably not found an upgrade in hundreds of further hours. Those things should be rare, very rare.

Now please comment your “feedback” on threads that are actually meant for it… i am not even sure if devs read this part of the forum very much.

Anything that is not “Off-Topic”… no reason to get sniffy…

If there are none, create one if you feel like you have something to say.

I just wanted to create a fun thread and not even 1 hour after creating it people already come in and bring in so much negativity and feedback at wrong spots.

I just wanted to create a fun thread and not even 1 hour after creating it people already come in and bring in so much negativity and feedback at wrong spots.

Welcome to the internet, you must be new here.

just junk like 95% of ALL drops in this game.

But if you don’t have junk to compare it to, how would you know a good item when it drops? Good items are good because they are better than the rest (or junk as you call them)

Personally I’m waiting for a solarium shield with reasonable implicits and a t6/7 block chance roll plus some reduced damage on block. Knowing my luck I’ll get it on a Heater shield with some minion affixes…

Guys where does the negativity come from lately? Yes it was a patch that didnt go well in the beginning, but the devs will adjust and work around exalted items in the future aswell. It’s Beta. And @Heavy just tried to create another cool idea community related thread so everyone can share their treasures.

These t5 ,t6 ,t5, t5 boots dropped - not the best stats, but gives us all hope that nice items might drop!

Yeh i know its beta, thats ok, but if everyone just keeps patting them on the back saying great job, well done, EHG are the best, what happens is, you end up with a shit game.

If negative feedback is not allowed or censored like in some games, then this game, sadly will go no where.

The beta argument only works so far.

But as i already stated. This is not the right place for feedback. I created this in “Off-Topic”

Yeh i know its beta, thats ok, but if everyone just keeps patting them on the back saying great job, well done, EHG are the best, what happens is, you end up with a shit game.

If negative feedback is not allowed or censored like in some games, then this game, sadly will go no where.

The beta argument only works so far.

I don’t know what threads you’re talking about but there are WAY more negative threads then positive ones. @Heavy stated in the OP that this was thread was for fun. Go join the plethora of negative ones if you want to give constructive feedback (note, positive feedback can also be constructive.) Hell, I haven’t even been able to play the new patch yet because of an issue on Macs and another with the cloud but I’m not griping about how this is the end times for the game because my feedback always takes into perspective that this is BETA. And yeah, before anyone starts with the Mac isn’t a gaming PC crap) you can go add that to thread I posted in the Bugs section, but not here.

I for one enjoy seeing the new items. Wish more were posting in here.

I fully agree with you here mate. I was not calling only your name out with my comment before, i just felt in general that a certain negativ vibe was going around with the new patch. But yes, since i started playing LE i never saw any negative feedback because the devs so far did a good job. The launch of 0.7.9 was definitly not the best and there were a lot of things they had to improve, but they did improve the game because of our feedback. Negative feedback IS good, and devs need this kind of feedback aswell to make the game better. I dont wanna even think about when multiplayer launches how broken the game will be lol.
I just felt a general negative vibe that players lost their hope in this game because they did one mistake in the last couple month. Don’t get me wrong, it was nothing personal, and i know what you are trying to say.
I was just on heavys side because he made a topic completely unrelated to the current situation wether exalted items are good or bad, it was all about showing your babies and having fun with each other. Long story short, lets not fight with each other here on the forum.
Cheers

Well i have stepped out now trickster, i will wait for release, so wont be hearing from me for a while, if at all.

Will still follow a couple of the guys, thyworm & vision but thats about it, ive moved on to achievement hunting in another cpl of games.

Good luck buddy, big patches with rogue, mp and trade will come. Check it out! I highly doubt the game will fully release this year, but we never know. Definitly following the streamers aswell. Hope seeing you soon again!

So, to return this to the original intention.

Here is my first purple! Was finally able to get into the game. This dropped on my very first Monoloth run. It’s probably a guaranteed kind of drop. It’s also probably not terribly exciting at all but I promised @Heavy I’d post the very first purple I got. 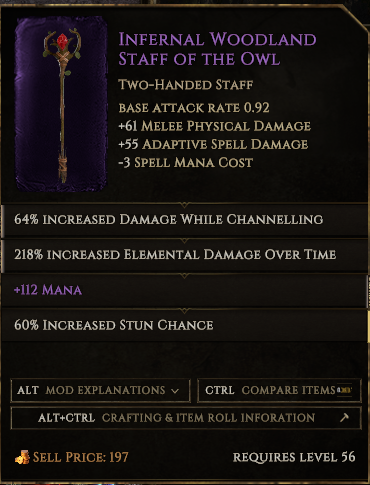 found this, t6 mana and t5 ele damage over time… decided to roll an ignite-focused ele nova mage to make the most use of it, but haven’t gotten him to high enough level to use it yet. the build is already feeling really strong… this is gonna be a fairly chunky upgrade when i get to it.

Nice, the mana is exceptionally sweet to brake the if you have X max mana milestones for passive and idols.

Especially if you don’t go for a high mana build, but still want to break those milestones for the insane stat boosts.

Is that thing already crafted in any way? You can further improve the Channeled Damage right? that is T3 if i remember the values.

Usually i don’t like items with one specific high protection, since replacing it can be pain. But you still have the preffixes open, that’s nice and can go many routes.