Wanted to try out the combination Necro with Summon Wraith and sacrifice and this is the result.

Holy F*** hahah yeah the exact first words when i 1 shootet the 100 Boss. In this guide im going to walk you through the Sacrifice Necromancer a massive dps build for the videogame Last Epoch. We are able to get up to 1 Million+ dps. We are also able to gain a lot of ward to be very tanky. No defence stats are needed 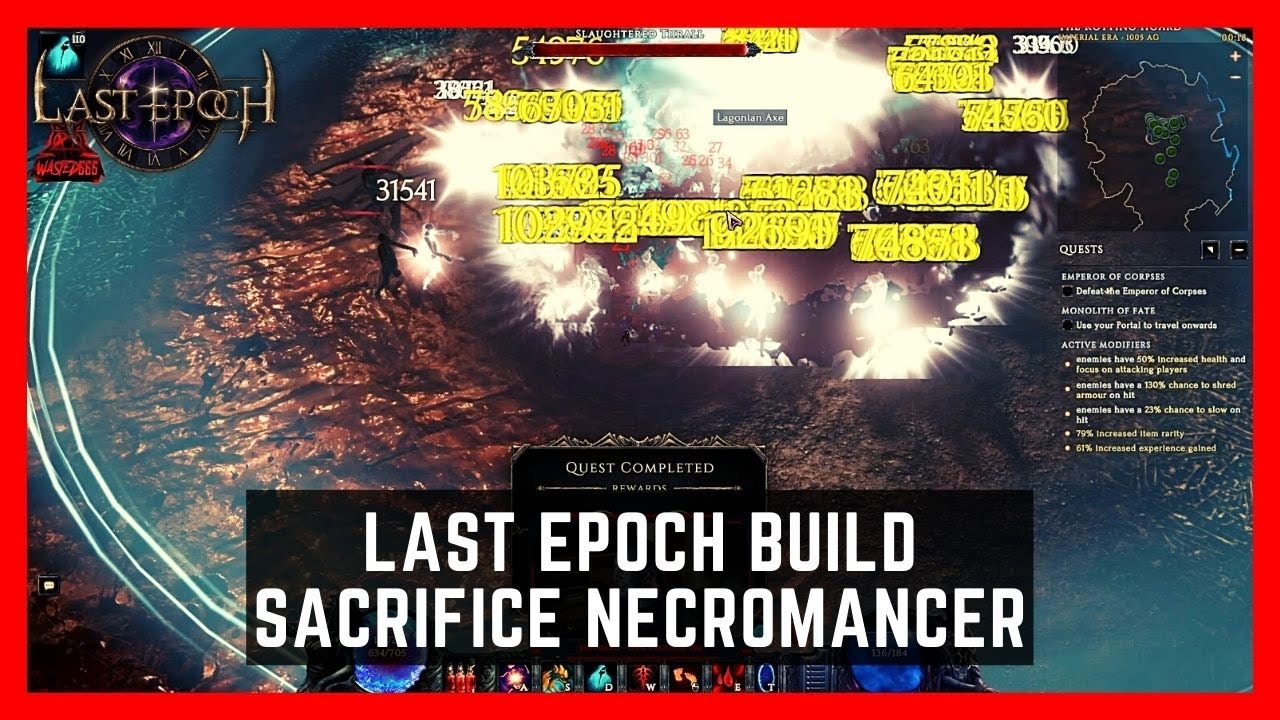 Necro in this game is balanced so awfully its actually comical

now see if you can go for 230+ minions, that’s my beastmaster record so far.

Without reading it I assume you’re getting a ****ton of Wraiths & having sacrifice chain through them. Will watch after work (looking forward to it)…

game is still in beta, so think we are also here to help em balance all builds and combinations. and there are a lot of combinations possible i like this. there will be meta builds yeah but this is way to op my opinion

wow dude thats insane. congrats! i need to try push it even more

Have you tried a slightly different bone curse set up? What about dropping the aura, Merciless and Crimson Enlightenment & taking Cursed Limbs, Illusion of Pain & possibly Defile Defences. Then you’d have 5s out of 6 where all of your exploding minions would be consuming & reapplying Bone Curse, applying armour shred (as your build currently does) for escalating damage. The Bone Curse procs would always proc & do 150% more damage.

Does Bone Curse’s Merciless node (up to 50% more minion phys damage) affect the damage from Sacrifice? I would assume not (since Sacrifice is a player skill which shouldn’t scale from the minion and benefit from the minion’s damage buffs).

So which is more effective, a free cast of Rip Blood (which I felt to be kinda unwieldy) or all of your Sacrifice explosions procing 150% more damage crits from Bone Curse?

Edit: I’d think some leech from the bottom node on Lich might help as well if you’re not going low life.

Edit#3: Or you could just get a load of leech from leech on crit at the top of the Necro tree…

Edit#2: If you take the Merciless node, can you even cast Bone Curse on mobs? If not, Brittle Bones wouldn’t (shouldn’t) affect the mobs.

Does Bone Curse’s Merciless node (up to 50% more minion phys damage) affect the damage from Sacrifice?
No it does not push Sacrifice damage thats correct

So which is more effective, a free cast of Rip Blood (which I felt to be kinda unwieldy) or all of your Sacrifice explosions procing 150% more damage crits from Bone Curse?
Yes this would be definitely a huge boost

Edit#2: If you take the Merciless node, can you even cast Bone Curse on mobs? If not, Brittle Bones wouldn’t (shouldn’t) affect the mobs.
Yeah i should skip brittle bones i guess as well.

I’ve just tried an un-specc’d sacrifice on a skellie mage, and it damaged the training dummy twice…

Wow it is crazy !
I love this

ps… You could also call this “FPS killer”…

hahahah yeah for sure.

FPS Killer would be a good clickbait title

It’s only clickbait if it’s not true.

I’m enjoying levelling this build, though I learned that it’s not a particularly cheap (in terms of mana) build…

I therefore made the mistake of de-specialising rip blood for sacrifice as soon as it was available. IMO, if you’re levelling with this then you should take rip blood & spec for mana on hit so that by the time you can get sacrifice (probably on the lvl 34 skill spec) you can afford to cast it.

It’s also frustraiting that sacrifice is centred on the player, not the cursor.

havent tried leveling this build but yeah you`ll need a lot of mana for it for sure.

good suggestions mate this will helpfor sure a lot of new players.

I’m assuming this build is completely dead with the recent gutting of the Acolyte and sacrifice?

I wouldn’t say dead, but I think it would require somewhat of a rework (as I’ve mentioned to you several times in game chat).

Swap out Rip Blood for Drain Life (to get mana back per Boardman’s build here) & probably swap Golem for Dread Shade & spec Dread Shade to cast Sacrifice for you when the possessed minion dies.

It’s not going to be as “elegant” (ie, broken) as the original build, but you could work round it.