The upcoming Patch 0.7.2 includes a specialization tree for Reaper Form!

While it may change slightly between now and the patch going live on Friday, we wanted to give you a preview of the nodes you can expect to see. Happy build planning! ¹ Swiftness lasts 30 seconds and grants 1% increased movement speed and can stack up to 10 times. We previously posted a preview of Shield Throw’s specialization tree.

Prefer one layout or the other? We’d love to hear your feedback!

I think Shield Throw’s layout was a little easier to understand when it came to what connects with what.

Looks like there’s lots of options, and I’m glad to finally have Acolyte get access to Cold Damage!

I think Shield Throw’s layout was a little easier to understand when it came to what connects with what.

Thank you for the feedback!

The idea behind this design is that each table represents an individual branch on the tree, with it beginning at the root node and then moving further away from it. To be honest I’m not entirely happy with either design - while I share your belief that the previous one was perhaps more informative, I think it looked more cluttered and messy. It’s possible that the next time we do a specialization tree preview it’ll be something completely different again.

I agree - I dont really like either. Is it not possible to make the preview look like the actual tree in game?

Is it not possible to make the preview look like the actual tree in game?

Could you clarify what you had in mind?

I think that’s probably the goal for us. We just don’t quite have the bandwidth to develop that system yet. 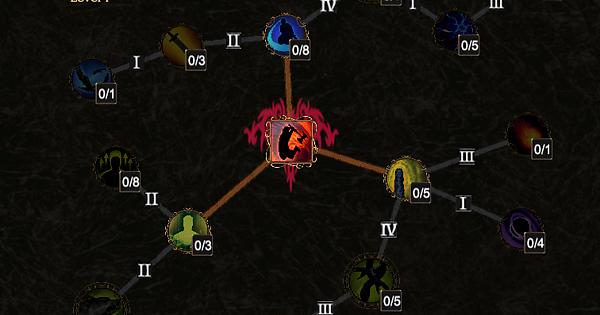 It’s not hard for me to post a single monolithic image, but I don’t see a great way of making that pleasant for people on phones, and unfortunately it isn’t feasible for us to be working on multiple versions of social posts. Maybe one day if we’ve a dedicated CM…

Yea. YouTube could work. I’m just too used to the actual skill tree structure that my mind had difficulty parsing the pseudo-sequential table formats in the two previews you mentioned

Either format + a youtube video, or even a screenshot of the tree with the names of the nodes on it should work perfectly

I think the text version used here is pretty good but yeah a video would be cool too. Also here I thought you were a dedicated CM. What other stuff do you do if you don’t mind me asking?

Free editor to create online diagrams. Use our diagram editor to make Flowcharts, UML diagrams, ER diagrams, Network Diagrams, Mockups, floorplans and many more. Open and save your projects and export to Image or PDF.


how about this? is it free to use for game companies?
seems like a fine tool to sketch graphs, with tooltips, which can then be exported as pdf or html
1 Like
Sarno August 8, 2019, 5:05pm #15

Either format + a youtube video, or even a screenshot of the tree with the names of the nodes on it should work perfectly

My concern with a single large image would be how well it would work for mobile users. I might do some quick mockups and test on my own phone to see if that fear is well founded.

I hadn’t thought of the combination, though - that’s a good idea!

Also here I thought you were a dedicated CM. What other stuff do you do if you don’t mind me asking?

At indie devs you generally have most people wearing multiple hats, as it were.

This layout looks much cleaner

The tree look fine and it would be great if there have a node that let you raise the dead on hit too !

I guess you’ll have to settle for