The plague is back! 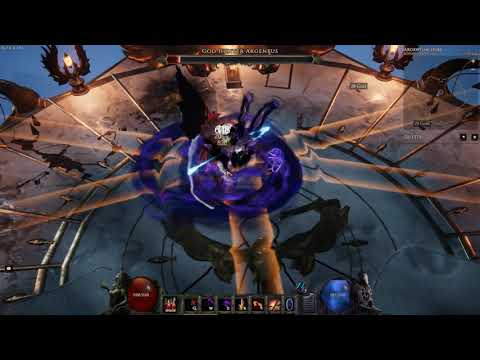 Glad to see the normality has returned to the universe, Boardman’s using a Plague Bearer’s staff…

What are the main differences between this and your Rive VK build? Which is “better” or which would you recommend more to a total noob?

well rive is using a different skill… different weapon… Hit damage instead of dot damage so its a completely different build. There both endgame builds, take time to gear for, i like plague and dots more and for me its nice since you can keep more range from the mobs.

Cool thanks man! Both your builds look awesome, I’ll have to play around and see which one I enjoy more then

Bro, you’re coming out with fun looking builds faster than I can even put one good low-life set together! Cut it out (not really please keep doing what you do).

Ok then… Pretty decent build - if you have a decent base level, it works even while you dont have ideal gear.

Am at Level 77 and with appropriate passives leveled & skills to 18, I just toe-to-toed the Abomination tanking almost everything - only minimal kiting. I only have 600 health and 29% glancing blows and only have the plague staff and and no amulet. My elemental is 70%+ and others around 45%+ . He got me down to less than 50 health on a few occassions but the leech on this build means that you are almost instantaneously fully healed again a split second later - even before you realise you should probably have moved. Figure some luck came into play for me but was surprisingly easy using this build.

The most difficult part of this build is getting those per item boost affixes for necro/poison & glancing but it works even without the gear. And I have never seen the Vengence Mana boost affix on anything.

Not sure on the exact best playstyle / skill sequence is yet but is pretty decent moving around the mobs tagging them all and as long as devouring orb is up even rares are toast in a few seconds. It scales up in damage as you mow down the mobs and as long as there is something to destroy at no time do you feel like you are not doing enough damage. A few whacks at the nearest mob with the staff to replenish mana and your survival rate is high.

It seems so capable without the best gear that I figure its probably open to a lot of variation while you hope/farm for the BiS drops/crafts. I am using whatever I have in stash but nothing ideal yet.

Need to test out the other big bosses but I think that once correctly geared this build could be pretty much indestructable with a very nice paced clear rate.

Few more hours in this… just a quick update to say that I changed from the Plague Staff to the Blade and Defiance of the forgotten god & I swapped the helm for Decaying Skull… just to test the theory that this build may work with flexible gear requirements.

basic attack dps jumps to over 1200 from around 650. I still dont have BiS gear for all the protections but this combination seems to work quite well…

main issue I seem to be having is not the protections (although its still an issue with bosses) but its keeping mana up… still have not found the Vengence mana boost affix on anything yet.

Few more hours in this… just a quick update to say that I changed from the Plague Staff to the Blade and Defiance of the forgotten god & I swapped the helm for Decaying Skull… just to test the theory that this build may work with flexible gear requirements.

basic attack dps jumps to over 1200 from around 650. I still dont have BiS gear for all the protections but this combination seems to work quite well…

Unfortunately the basic attack dps is just that, it doesn’t include any skill effects (unless they’re global) or ailments. A better way would be to use a standard candle (ie, a non-monolith boss, or perhaps an early monolith boss if you can avoid too many modifiers that affect them) & see how long it takes to kill them.

Yip. I just wanted to see if temporary gear would work while I try for the gear Boardman21 suggests.

The plague staff is definitely faster if you manage to get some of the gear (esp void damage over time) but the others are all passable to use while you farm. Since finding the amulet (that i did not have) I have reverted back to the staff and I expect to stop using Woven Flesh when I find that elusive Mana on Vengence affix and/or improve my glancing blow stat.

Its a great build that is pretty easy to get to even if you dont have the perfect items - and this is occasionally a flaw in some end-game builds - getting there is hard.

Last update on this great build - Got to level 90 so far.

I will definitely push this char to lvl 100 as I am comfortable with it now and like the playstyle. I have accepted the gearing headache and for now am willing to grind away at the problem.

Thanks for another great build @boardman21!

For boss fights, I found that not taking the Dark Moon node was acceptable, it massively reduces the mana cost & they’ll be in-range all the time in a boss fight, unless it moves around a lot. Even for clear it’s less of an issue than you may thing because the range on the Abyssal Orbs is pretty high. If you respec’d out of Dark Moon, you’d loose the movement speed, but you’d be able to max Orb master & be firing ALL OF THE ABYSSAL ORBS. And probably have more mana free for other things.