So here 1000+ waves of Ignite And Bite at all new speeds! 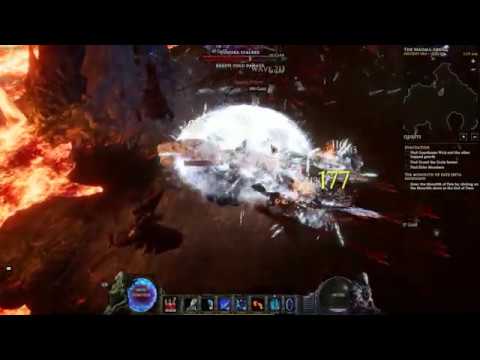 )” title you previously had quite funny. Well played sir.

Another excellent video Boardman21. Thank you!

Is it possible to get pics of the spec instead of a video? Easier to track and scroll through.

unfortunately this website hates my jpeg pictures and wont let me post them, i did how ever in the thumbnails of the video put a marker at every skill and each passive page so that you can jump to it and pause the video there. Hopefully i can convert picture to something that works on this forum soon.

Imgur.com is your friend (you can even embed the images in your post rather than just link them).

Thanks for the reply!
As Llama8 says. You can post them on a site and then link it!

didnt see the thumbnails så gonna go check that out!

The synergy in this build picks up fairly early in player levels. I have yet to get to the numbers seen in the video in terms of ward, but I broke 15k ward while below level 70 and only around 50 INT at the time.

Not sure if any patches changed the fundamental components of the build, so hopefully I can get a couple hundred waves by player level 100. For what it is worth, I reached wave 85 (player level 72) but started to fall asleep and died. Most of the time I am around 5k ward, so I am going to review to see where I can make improvements without the other 20+ player levels. I suspect it is going to be INT/ward retention along with melee attack speed. I do not think the smaller mana pool is affecting things too much (i.e., more downtime due to more mana strikes).

This is a fairly friendly newish player build as long as new players do not expect to reach the insane numbers in the video. Does not require super rare affixes, the uniques are not absolutely required (I used humming bee for a while) and it is successful without 100 player levels.

I may try swapping Enchant Weapon out as you described in the video just to see how it feels and if it helps me push in the arena, although the best trick for me is going to be to stop dozing off while playing.