This thread has the potential to be very helpful. I’m going to move the thread from #general to #technical-support and sticky it there. I will need to ask for some additional information.

To be as useful as possible, reports of poor performance should include;

Finally, please note we cannot accept performance reports if you are using any method of auto-casting skills outside of what the game itself facilitates. This includes macros, abusing Num Lock functionality, and anything else outside of unique items and skill trees.

I have capped the fps to 100 ingame and i can maintain that number through most of the game, but as soon a pack of enemies throws a clusterf***k on me like dozens of projectiles that explode on impact or practically anyhting that persists longer than 3 seconds, my fps drops down to sometimes even 20, a loss of roughly 80%!

I think its a particle problem. To many things to render, same as in poe where the perfomance is equally worse. Would suggest you look at the Vulkan API and/or Dynamic Culling, which increased poe performance significantly or give us at least a graphic option to turn down particle rendering. 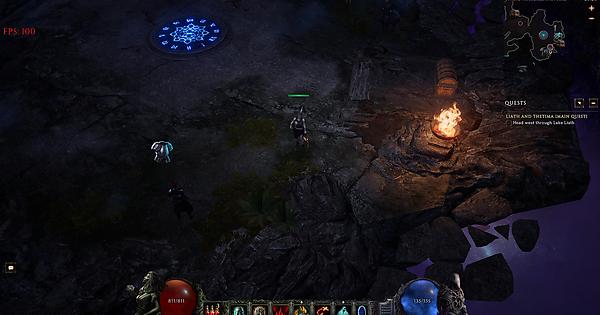 As seen in the pictures, as soon enemies start to fire their stuff + my minion army does its thing, fps goes into the ground. This is even more the case in monolith or arena where mobs live longer and cast frequently. Without minions its still dropping to around 70 - 80 fps sometimes. Without the limiter i could run the game at 200+ fps.