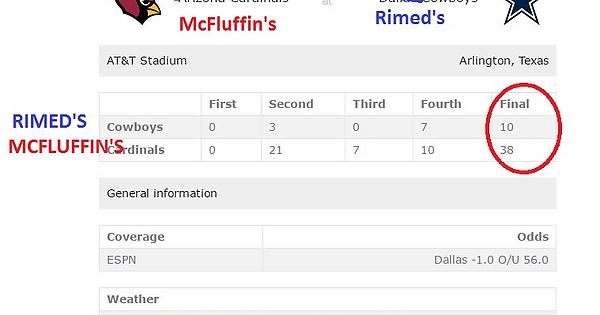 Last night McFluffin’s Cardinals took on Rimed’s Cowboys for the Last Epoch (LE) Twitch community football grudge match of the season. Anyone who has ever spent anytime in McFluffin’s stream when Rimed stops by knows what I’m talking about. The competition, competitiveness, and smack talking is REAL.

What some of you may NOT know is that this story and rivalry goes back two lifetimes. McFluffin and Rimed may not look it, but they are old souls. Time travel with me if you dare. Let’s go back in time to pre-LE days. Back to darker times, when there was no LE. Back in the 1920’s when McFluffin was born in Chicago, with his beloved Cardinals. Before the big move to St. Louis in the 1960’s, before the AFL-NFL merger in 1970, around the time Rimed and his Cowboys were born in 1960 is close to when this historic rivalry began.

1961, the year it all began. Being ~1 year old Rimed didn’t waste any time befriending McFluffin, in fact he took the opposite route and made him his best rival. In 1961 the Cowboys moved from the Western Division to the Eastern Division, the home of the McFluffin Cardinals. Rimed didn’t waste any time getting started. In 1965 the Cardinals were in first place in the East until the Cowboys defeated them, sending them into a tail spin. The Cowboys took the division that year, and you can bet McFluffin has not forgotten. Over the years the rivalry worsened and eventually grew, by leaps and bounds, into the epic rivalry it is today. In fact it got so out of hand about ~2002 the NFL realigned the league, separating the division rivals “for the good of the league” in an attempt to end a division rivalry that has lasted over 4 decades.

As you can see separating the teams may have worked to some extent as it’s too bad Rimed’s Cowboys forgot there was a football game last night and failed to deliver on this rivalry. With a new head coach this season hopes were high for Cowboys fans. However, the Cowboys injury plagued season has provided many harsh setbacks including the loss last night in a huge rivalry game. Congratulations to McFluffin and his Cardinals on this well deserved grudge match victory.

The only thing more lopsided than the beatdown my Cardinals gave those Cowboys is how often I’m right and Rimed is wrong!

Only Sarno can do a post with no text in it. I’m also confused as to whether this post is off-topic (since I’m not saying anything about not-Football) or on-topic since the thread is in off-topic.

Nice story from the OP though.

Thanks Llama8. I’m confused too, but suspect he is keeping an eye on this post due to trash talk potentially getting out of hand. <3

Nah, you wouldn’t need to do that. I’m sure Sarno reads all the threads on the forum anyway…