Hey guys! HolyCoffee here, and i would like to discuss how the defensive layers works on channeling abilities. This post mainly draws experience from warpath, but i would like to know, what you guys have experienced, especially on other type of builds.

I am making this post, because i feel right now, that the game is “forcing” your channeling builds in a non “particular” fun direction. Right now, these Armour and Protections While Channelling, is a really nice way to build your character that use channeling abilities. It’s a fresh a new way, for only specific types of build - i really love that! The more different ways you can build a characters, is awesome. The same goes for the newly added uniq ring, Liath’s Signet - i love this uniq! Super nice design.

What i don’t like about it right now is, that your character is a glass canon when you are not channeling. This is leading to some “non fun” moments - where you will get one shottet, when you are not channeling. My main problem about this is, that on a lot of channeling abilities, it’s forcing you into some very specific type of playstyles. Like when smelters wrath is on cooldown, you want to use rebuke, just in order to stay alive. To me, “this” limited playstyle, where you are forced to only use, instant abilities while channeling, is not particular fun. This is of cause subjective, what do you guys think?

Regarding to, how it could be fixed, i don’t have any particular good ideas. The only idea i could think of, what giving the channeling defensive protections layer a “recently effect”, where it stays on your character for 3 seconds after you have stopped channeling (or something like that). This would allow this type of builds , to use a lot of different abilities, without getting punished. If this get implemented, the channeling affixes and uniq, should maybe get nerfed a little bit (i dont now honestly).

You could argue, that you just have to build your character in a different way, where it does not rely on channeling - but for me i don’t see why these channeling affixes was implemented in the first plays. What are your guys thoughts on the topic? I am pretty sure, a lot of people have a lot of different opinions on this topic.

I approve of lasting buff!(1-1.5 sec duration would be fine)

If they did give it a lasting duration, I think it should decay over that duration.

That said, I’m not sure it should have a lasting duration. If you want to have armour/protections while you’re not channelling, you should probably put some on your gear.

I think the decay, would be a nice way to nerf it. Because obviously, a duration would be a huge buff. I have just after 100+ hours on warpath, been close to smashing my keyboard many times hahahaha. for being one-shotted in the 0.5cd time on warpath. In due to my nature, of wanting to minmax a character, i obvious want to utilize these channeling effects, but they just lead to a non particular fun way to play, at least for me. Hahe maybe its a desperate way to try to buff warpath ahahah

I think they should get rid of the cooldown on Warpath (& other channelled skills, unless it’s been explicitly added by a node) & probably remove the initial cost as well.

I agree. with skills like reversal, you get instantly one-shottet, in 0.5cd, you get after using it. I am not sure why it have a cooldown, problably something, I have not thought about.

For me the purpose of this affix is this: Protect the player while channeling because he is more vulnerable when he cannot move. And with channeling as main skill you could not make any damage without channeling.

Imho this suggestion has more potential to “ruin” builds to abuse this mechanic. You could put a channeling ability into your load out to activate it everytime the additional protection runs out. People will feel forced to do this to get max protections.

It’s particularly annoying that some abilities that are labeled as instant cast, or have very short cast times interrupt your channels also, highlighting this issue, making you consume extra mana in the process.

It’d be good if anything with a cast time under 0.25s~ was changed to be instant when channeling (maybe even only for warpath)

Armour and Prots while channeling was implemented, I believe, 3 patches ago. At the time, it looked like the desired goal was to make disintegrate, and similar skills that require the player to stay in place while channeling, more viable. Of course, the community ended up finding the affix more beneficial for Warpath, since we could get all the armour and prots with 100% uptime while also avoiding DoTs and telegraphed attacks. Disintegrate, and similar skills, still have to move from these attacks even with the affix, which interrupts their channel, consequentially causing them to lose all of those prots at their most vulnerable point. The reaction from EHG was to nerf warpath and the affix at the same time (armour and prots while channeling took a 30% nerf two patches ago). Of course, this didn’t fix the problem for skills that were standing in place, instead it just made both Warpath and these other channeling skills less viable (with warpath taking the bigger hit). I personally don’t know what EHG should do at this point. It feels like, to make channeling skills that require the player to stand in place viable, some of the ways the game currently plays need to change. One shot kill attacks, telegraphed or not, are always going to be a serious problem for these kinds of builds. And as long as Warpath exists, it will always disproportionately benefit from the while channeling affix. Any defense that drops off while the player is actively trying to move away from potential damage sources is going to be inferior to permanent defenses. But I do like the buff being maintained for a few seconds when the player moves. It would provide a benefit for all of the channeling while standing still skills while not affecting warpath at all.

if they wanted an option to make channeled skills that root you more defensive a single node right next to the starting point would be enough and people can choose to take it or leave it all problems solved.
Armor and protections while channeling are a nice touch on equipment from my point of view and the numbers are in a very good spot. I like the instant benefit loss when you stop channeling as well and I see no reason why this should change. This is no issue a mouseclick or a fast teleport can’t handle. Sadly some classes have far better times with this then others but that’s always the case in a class centered game.

So why not make warpath a non channeled ability. Remove the tag and let the rest stay as it is.

Because that’s how Cyclone was in PoE originally & it sucked arse.

I am not as knowledgeable as most of the people on this thread but is seems like it would be more beneficial to have the defense in the specific trees and not in ones like warpath. Since you have higher mobility with it. Or ad it in to the actual abilities themselves while channeling. That way it can be abused. Add it to the actual ability such as disintegrate or the node to make LB a channel. And hav it last 1.5 to 2 sec after you stop channeling. That way you don’t have it with the high mobility skill and then stand in place skill benefits. That is my thoughts. But you guys probably have more well thought out ideas😄

Every thought counts ^¨^! The game should not be designed around the top 1% that nerd the shit out of the game, but be designed around every type of players in the game. Fun is very subjective, and its important to hear everyone, so not only a few people, are forcing the game in one particular direction

Yea its a good a idea, that it would be in the abilities - Warpath already have some nodes that is giving these kind of protections. The main issue I can see with those kind of nodes is, that the skill’s passive nodes is so important for multiplying the damage, that they have to be quite good, before I would consider going for it - unless I of cause is not using warpath as a damge dealter. Which also raises some whole knew problems.

Right now, you can maintain such a high amor from chanelling protections (since they give so high of flat armor), that you can “easy” reach 90+ mana regen, which allow you to abuse other abilities like, abyssal echoe and so on. Hahaha interesting mechanics are so dam difficult to balance around. This is why, it’ so difficult, to find good ARPG’s. Because most ARPG’s just choose either, to make all things powercreep, or make to many limitations, that the game is a bit boring to build (in my opinion :P).

Imho this suggestion has more potential to “ruin” builds to abuse this mechanic. You could put a channeling ability into your load out to activate it everytime the additional protection runs out. People will feel forced to do this to get max protections."

I am kinda feeling that this is already happening, with skills like rebuke and so on. But of cause, I don’t want changes either, that bring such playstyles into the game :)!

that you can “easy” reach 90+ mana regen, which allow you to abuse other abilities like, abyssal echoe and so on.

You sure you don’t mean 90% armour damage reduction? 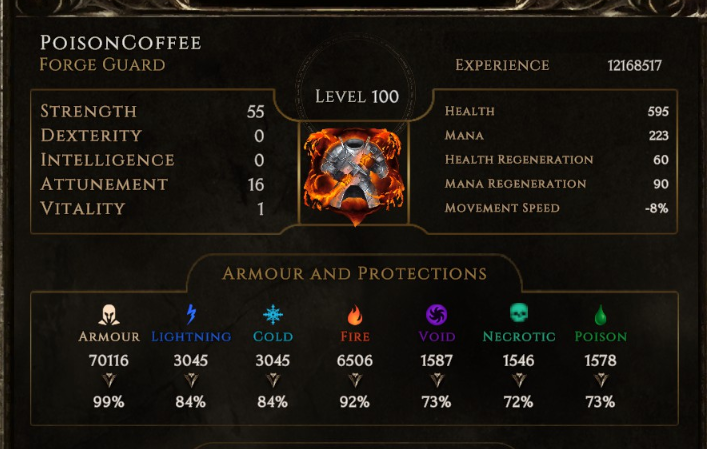 I’m enjoying these ideas. One clarification from my previous post; I don’t believe warpath being too powerful is the problem, it’s very much not in its current state, so excluding warpath from things would cause a new problem where warpath is even more underwhelming. I think any solution has to find a way to benefit warpath and other channeled abilities equally, so that neither one becomes overpowered or under powered by the change.

So what about implementing itnin the actual ability it’s self. Like a light version of it. That way you can focus on damage nodes or go for nodes that would buff that. Idk how hard that would be to add it to the actually skill and just add some defensive buff nodes to where you don’t have to pick them, but can if you want.