Full guide on werebear. Update for 0.7.5 jsut dont bother even trying to play it. Build was butchered

IMPORTANT: You do not need the attunement node at the top of the swipe tree, as swipe in bear form already gains damage from attunement. How ever I still suggest the totem on kill node because in the arena they can act as decoys even at high waves. (Thanks Tunk and Macknum)

With 0.7.5: (updated the werebear tree)
Base weapon crit chance was cut in half meaning 100% crit chance is pretty much impossible.
The nodes that increase damage/crit chance no longer have any affect on you (not sure why, the damage one worked before the patch)
Charge used to provide a sizeable boost to crit chance, it now adds roughly 10%
There are a couple other minor changes but those are the big ones.
My damage was 40-50k crit (on normal mobs) it now caps at 7k a hit.
Just go play sentinel like everyone else is. Seems to be the devs favorite class lol. Ill update if there changes in the future but for now the build isn’t able to push arena anymore.
If anyone has other information that i missed please let me know, ill add an update and credit your name to the info.

Twitch is the world's leading video platform and community for gamers.

Werebear is a very popular build right now and I get asked a lot for advice so here it is:
First thing before anything is too get 100% crit chance for full sustain.
Second is to get 17 attunement (It might be a little less and will do testing at a later date).
Even after having the minimum attunement ignore str and stack att it will give the same 4% damage increase while also providing ele res. I had over 80 att on my bear without min-maxing so thats 400 more ele res, which along with the bonus provided by bear form means you pretty much hit the diminishing value threshold for ele res without using gear suffixes which are used for life/void res.

Don’t use entangling roots or maelstrom on autocast as they cost mana ice thorns do not. I think it has something to do with the wording of each skill? 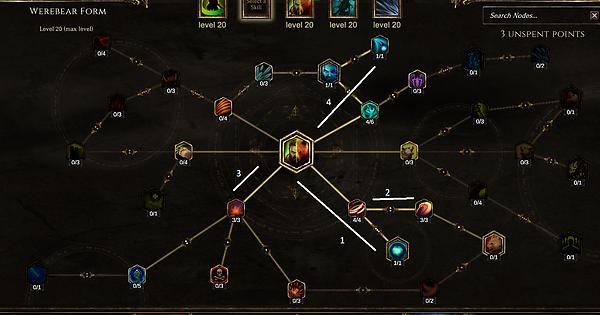 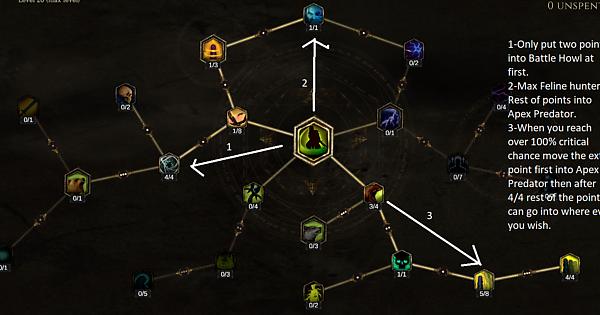 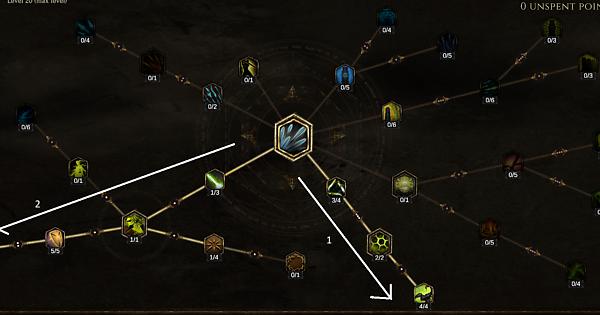 This skill can cast itself when you are hit, as long as you take the correct passives, and because you cant cast other skills when shape-shifted this skill is better than nothing.
Primalist Tree: 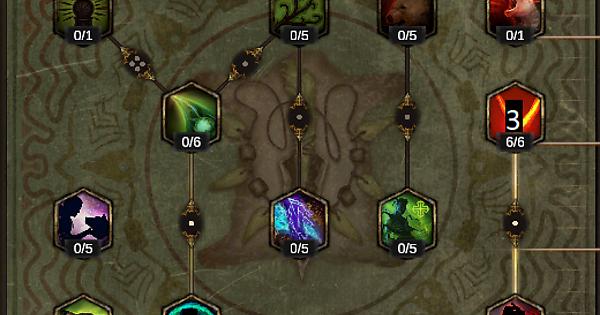 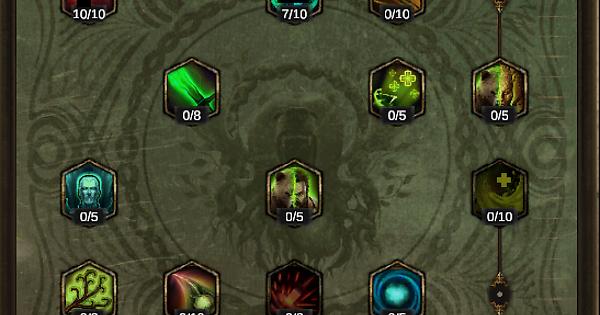 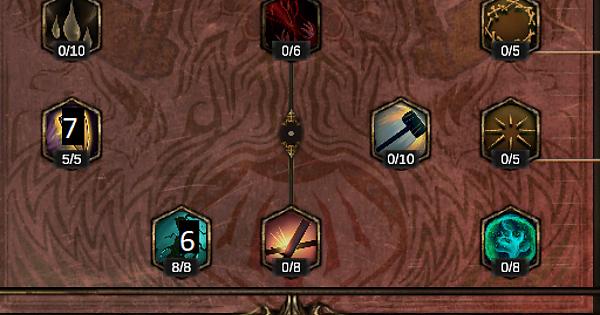 Druid then beast master then back to druid follow the numbers. 3.5 comes before 4 was an edit i did after.

The skills i feel are useful and why:
Werebear Swipe: uses your swipe skill tree effectively giving you 2 skill trees for one skill.
Charge: Use this even if you don’t need to move to keep its buffs up. I do almost 2X more damage with the buff up. (I think it might be bugged?)
Ravage: Always use when starting an attack on an elite or boss. It increases the damage the target takes by 10% which is amazing because thats a flat 10% increase in damage to the mob. These bonus are more powerful than say %increased damage.

My gear (as requested):
weapon, it should have flat damage over attack speed but RNG had other ideas: 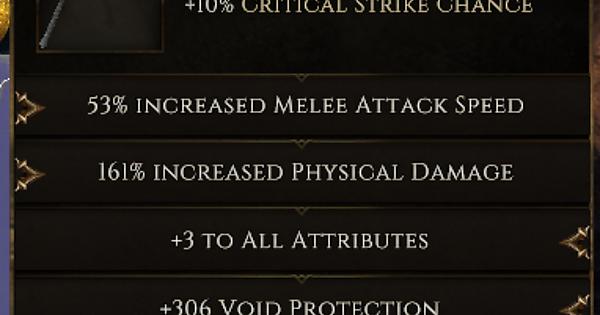 Body armour not really that good either but tis the best i could find: 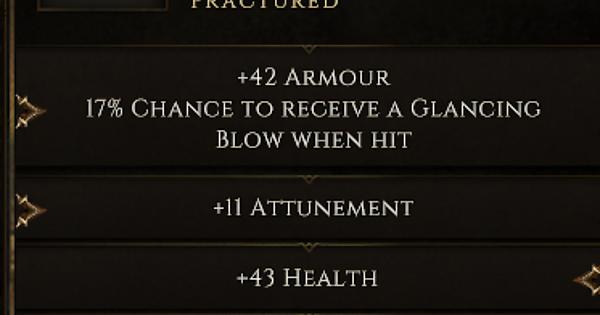 the rest of my gear is sooo incredibly bad it would be embarrassing to post. T2 rolls on it all and it didnt even have any life rolls (im not sure what i was thinking)

If you don’t mind, would like to see a gameplay video clip as well

25 attunement is enough, cause swipe can not spend mana less than 2

ok thanks though you can get to 1 mana cost wipe by taking the no health regen node. Ive personally done it

A gameplay video is really, really, REALLY important for any guide to be completed. I’d appreciate if you can post a gameplay in the future.

Thanks for the guide.

this is actually my first build guide ever and i made it mid stream its far from complete ill work on it while i eat super.

Hi!
Thanks in advance for a great guide.
I have a question though. How Come you specialise into ice thorns?
Would really add to the quality of the guide if you write explanations below each skill to give us an idea of how you think.
And maybe a short section on how to play the build and what the cons and pros of it are.
Thanks!

yes sorry honestly the only reason i made this guide is because of the number of people asking, I will put more effort into this and other guides in the future. Ice thorns cast itself when you are hit and increase your armour and ice resists. It isn’t much of a boost but you can’t cast other skills while in bear form so it’s more of a “better than nothing” situation.

PS welcome to the community. Feel free to check out my mini guide to the whole game in the general discussions section of the forums

A lot of people ask about how to Werebear? That’s nice because I think the class is underappreciated but it’s pretty easy and straight forward so i would love to know the questions people have outside of “How many points of attunment should I have at least?”.

There is no word about entaglning roots in your build. You can procc them with your bear skills and get the funny bonuses from it like 100% more dmg for example. When I look at my resis with only meh gear I think Ice thorns are a biiiiig waste of a skill just for that little more protections. Did you look at your stats how much changes after it procced? For myself it’s a pretty big joke but it may be different when your resis are lower.

Do you play your bear with only 3 buttons as well? Bearswipe, charge and roar? The other ability is totaly lackluster in my Eyes or did I miss something?

Nice to see a guide after all.

oh i didn’t realize you could proc roots. Honesty this wasnt a flushed out build. I wasnt even trying to go far in arena just level to 100. I wouldn’t have made this guide if i wasn’t asked. Ravage is way better than roar tbh, hold alt when reading it “increases damage taken by 10%” thats HUGE for elites. Also the ice thorns are simply bc there is nothing better for that slot ^^

Werebear Swipe already gets 4% increased damage per point of attunement, so I suspect Avatar of the Wild doesn’t stack with it.

So those two points (Avatar of the Wild & Claws of Stone) might be better used elsewhere.

Werebear Swipe (also Ravage & Charge) does get 4% dmg from attunement, at least my ALT says so.

oic i never bothered checking the individual skills! i will do testing and update the guide thank you for bringing this to my attention

EDIT: i removed the point from the swipe tree for attunement and i didnt notice a damage change but i will need to re-level the skill to test further it would be nice if a dev could comment on whether the skill stack attunement or not.

EDIT: i removed the point from the swipe tree for attunement and i didnt notice a damage change but i will need to re-level the skill to test further it would be nice if a dev could comment on whether the skill stack attunement or not.

Bear swipe already has a attunment conversion se he don’t get one on top of it. If you play a high uptime bear you can forget to put points there.

What’s the the purpose of Ice thorns if you’re in werebear form most of the time?

You can proc ice throns when you are hit so in werebear its instant/auto cast40% chance (max) when you take a hit. Build the node tree defensively and you get + armor and + elemental for each layer of ice thorns. It definitely helps defensively.

yeah what boardman said but its more of a “better than nothing” type deal.

You can also run maelstrom on hit but it consumes way to much mana.