Has anyone tried this or something similar?

Use Reaper Form and Harvest for my dmg
Aura of decay to buff my dmg and minions
Use rogues and skeleton warriors (or mages?)

Harvest specced for turn all dmg to Necrotic, get life on hit based on your intelligence, max +melee Crit with harvest, and gain +300% dmg on next hit and for your minions (stackable).

Aura of decay specced into healing minions, giving them +100% chance to poison on hit and +150% poison damage. Also specc into “apply 9 stacks of poison on foe when hit” and “plague enemy’s nearby” - rest into +% area.

Warrior max the amount, max attack speed, get the +100% poison chance on hit. Rest into dmg / survival or +% melee area.

Reaper Form I haven’t checked the tree yet, so I’ll have to check… Maybe maybe something adds to minions poison or synergies with heavy int (e.g. reap) - otherwise buff dmg/survival/reaper Form duration.

Items would focus on survival, attack speed (for harvest to shine and get buff often), and buff damage for me and minions - and some Crit (while harvest has already 14% base Crit, this makes it easy to buff). So I’d use a 2h weapon with maybe base Crit - which, with 50% crit chance from Lich passive tree, gives harvest already 30-35% crit chance total - so I can use attackspeed prefix and melee Crit chance - or add Necrotic damage, whichever scales better. With gloves on attack speed, and 15% from Amulett base - we would easily get that over 100% attack speed for our harvest.

So harvest has immense ats + life healing, over +100 added melee Necrotic dmg due to int, and over 300-400% added dmg due to passives.

Idols could buff minion attack speed by 60-80%, so minions themselves would have, with their specialization tree, 120-150% attack speed to apply that poison. Which is 9 minions total with a 150-250% chance to apply poison on hit very fast, with +850% dmg only from skills, passives and intelligence.

Not added in most of the possible stats from items yet, other than int and my weapon.

One I wanted to try out after marked for death has been removed - because Melee Lich with Soldiers!

Because Int and passive tree buffs every skill dmg wise and harvest becomes viable as dps, minion buffer and life-healing skill, and the minions could get their share too - easily scalable to +1000% dmg with items.

What ya guys think - anyone tried something similar?

Edit: calculating in my head, harvest would have 85 base dmg from weapon, +120 Necrotic Melee from int - which makes 200 base dmg. Add 400% dmg from passive tree, makes 800 dmg. With Melee Crit chance, we have 50% crit chance, and attack very fast, every 6th hit could Crit for over 10k dmg. anything that minions add to the table (especially single target dps due to poison) should make this really fun in practice too

I wish you luck. Tour build sounds well thought out.

The experience I made with melee launch builds is the lack of survivability as the content gets harder. The reaper form can help a bit. The main problem is sustain.

If you don’t want to recast your minions all the time you have to invest into minion gear. This leaves you vulnerable for melee combat because you lack protection.

Yeah my melee physical minion necromancer works well so far, but he´s got lots of life reg and wraths / Warriors and archers to block and back up.

I went along with the Lich anyways and found that with 100 int that is 400% ward Retention, and the Problems in melee you mentioned, I rather save those 28 Points I would invest in -75%Health drain and 172+% Damage, and get the ward on kill/crit nodes for only 13 Points, since I`m both gonna kill and crit ^^ and invest the other 15 saved points in other nodes that give damage to me and the minions!

Poison seems fairly underwhelming as do minions late game. The one exception for minions being useful late game is the really tanky, high regen reflect minions. If you want your minions to actually hit stuff to do damage just understand that around like wave 90 or so in arena your minions will be dying faster than you can make them. The main problem with this build you are contemplating is the number of affixes it takes to go for your own damage and minions. Minions need a lot of affixes to be useful so it makes it really difficult to also get damage for yourself and still have some reasonable defense. I think you will find you are better off going one way or the other, meaning all minions or no minions.

just understand that around like wave 90 or so in arena your minions will be dying faster than you can make them. The main problem with this build

Minion dodge can take you places. Both minion ignite and poison can be quite potent. Got to really build into it. As for going all minions are no minions really depends what ypur doing. You can have 1 golem and go really far reallt fast. Lots of wraiths and ailments. Lots of anythinf and reflect. Abomination… Well lets just say his true colors havemt been tapped yet. As for poison being underwhelming … Well… 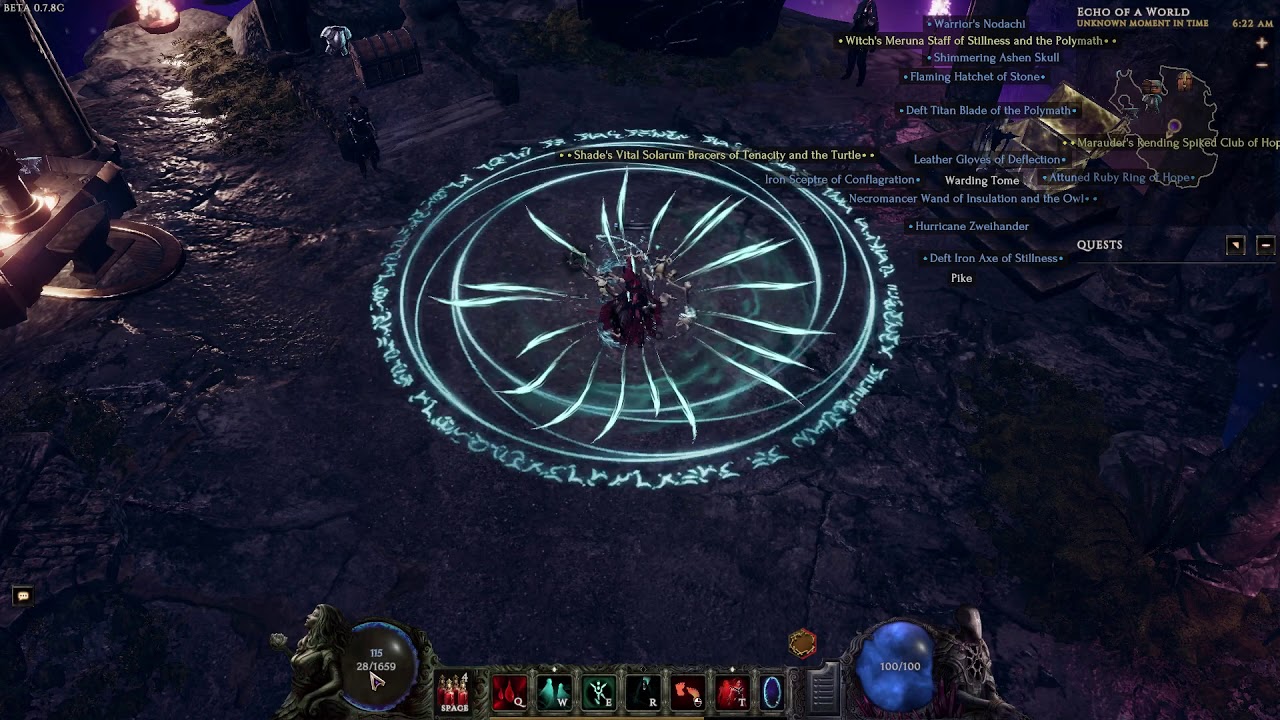 They survive oke-ish for now thanks to Dodge and help me kill stuff more quickly, especially when it’s big and single target. The rest I reap and harvest through

Tons of fun! Reaper Form is up for most time, and with some invest into cool down reduction I can see… I will test more when I have time! But fun so far

That poison setup is much more effective than I imagined (spirits seem really nice); however, OP was talking about using minions for poison. Your poison setup doesn’t seem to use those.

Edit: OP also talks about using IDOLs for minion attack speed. Is this something that Acolytes have access to? I haven’t seen any idols like that.

Is that poison build you linked in the video to still relevant?
Was the ranged attack for spirits limited to a 40% chance with a 1 Sec (or .67sec) cooldown when you ran that?
And what about the transplant node you were using to be able to death seal at 1% life and live? Looks like that is gone from the skill tree?

bone armor immunity has been removed. however the build with a few modifications is still good to go, ill do an updated version of it soon.

There is minions attack speed for acolyte, but in a different setup than for the primalist. I think for the acolyte, it’s maybe 10-15 or so in a 1x3 - but not quite sure about that! But I calculated its possible to get at least 60% more.

But when refining my build, and when I can push my skeletons dmg (which will come after I finished my own dmg and defense, and then made skeletons survival good) - I can push dot dmg and I can push attack speed on idols for at least 200-400% minion dot and dmg, and I still have to get 40-60+ more Int on passives and equipment, that will further help with my own dmg and my skeles health and dmg.

So I assume I can make the reaper stable in survival and dmg (as he is already a beast himself), and make my minions push that 3500 dot into much higher numbers and make it apply in a much faster rate.

It’s true though, that it needs tons of affixes, and to find the right balance and build skills and passive too in a way that it all hits that sweet point where it works out - I’m getting there!

The real deal is me having over 100% attackspeed with good base dmg and high Crit, and every 6th hit doing triple dmg and increasing my skeles dmg. Auro of decay increases minions dmg massive - so the setup itself is already, through skills, in a very good spot technically.

The ones possible are These BiS:

Alternatively, four Grand Idols: prefix +8% crit Chance for all skels and mages, and either 92% dmg reflected by me and minions, or 120% physical or Poison dmg for me and minions as Suffix. But I doubt minions will blow anything due to some crit Chance - will never be viable without necromancer IMO

I found a way that makes this build work now, and it’s the only way I found to be workable at all.

Mages: the warriors too, Melee range, Crit and health on Crit, rest attack speed and frenzy

Bone curse: mainly for the marked for death, the 3 vanguard skeles, and little extra damage. Necrotic too

Items and passives focus on physical dmg for me and minions, that is 30 point into necromancer, 21 into base, rest into Lich mainly for Int, the Crit nodes and ward on Crit

Idols give up to 8% crit chance to all skelles, Helm gives 50-70% Crit chance to me and skelles, armor can give skelles additional Melee Crit (although it’s not necessary).

With a sovnya base that has Melee Crit, and some Crit strike chance here and there, and given that harvest does double dmg on cursed - harvest gets over 75% Crit chance. Skelles have 30-40% chance at least (15%+ base and 380% increased CC makes for 60%+ at least). I think the mage warriors are at 100% Crit nearly this way

Took me ages to make this work! But this way I got enough damage for myself and my skelles and enough space to add those damn defenses for me and my skelles. I got 100% GB and CBA with sufficient life and protections, and 60 Int atm that helps everything^^

When I get that death rattle with a good roll, minions will get that 100-200 Crit multi, and then, this build should start to work out.

I went on my first try to Monolith lvl 20 on the level 92 Monolith, minions hardly ever die and we both deal sufficient damage thanks to that almighty Crit and physical dmg boost.

The poison idea? Any other char did better with semi good gear and many less level than my Lich with poison minions, although I had gear with T 18-21. Going only Lich, or playing my beastmaster - they would do better with T15 gear only lol

This Crit physical build shines gloriously. May make a short video for impressions soon - it’s soo fun still, and just what I wanted!

The poison idea? Any other char did better with semi good gear and many less level than my Lich with poison minions, although I had gear with T 18-21. Going only Lich, or playing my beastmaster - they would do better with T15 gear only lol

I also found melee poison minions are so painful on acolyte. I think those melee poison nodes on the passive tree are just to troll players. I also tried stacking nothing but defensive passives and stats, and found that you can barely keep minions alive without the aforementioned dodge or leech options.

Right now there are clearly superior choices: Beastmaster for poison pets (but not bleed), acolyte for bleed pets (but not poison), either for crit pets (much easier to plan and itemise for).

I found a death rattle TODAY and within the same 5 Minute window I also found a RIBBON OF BLOOD (leech for minions, +physical melee dmg, minions cannot be crit).

I turned into a machine that melts through the Monolith like butter. My army not dying and melting thorugh as if I dont even exist

Poison is very strong, on beastmaster, acolyte, necromancer, and Sorcerer. I have done 500k+ dps with poison on all of them. Builds and guides included, so you ever looking to do a poison build, just talk to boardman or I.

Are you running a physical pet build @Ayranjie?