Any Alluvion builds yet?

Seems like a serious unique… was wondering if there are any builds for it yet. (ps. nothing on the forum that search showed up) 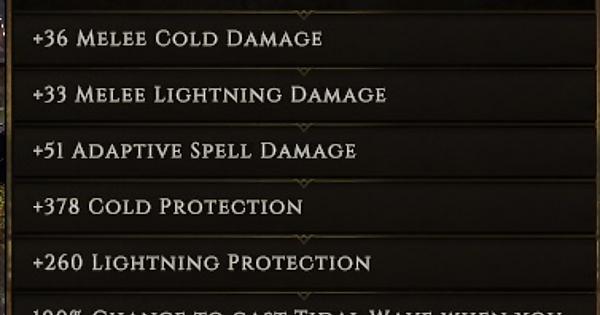 Holy shamoly. Seems like the perfect sword for a shaman build I have in mind since long. Its Melee and it casts avalanche boulders on melee chance.

Now it all makes sense

So whatcha waiting for?

I did some pretty sick stuff with a Spellblade and a Shaman.

Spellblade was mainly with Shatter Strike and the Shaman was Tempest Strike as main dmg skill.

Especially the Shaman, since Tempest Strike can’t be scaled with attack speed and a 2H slow heavy hitting weapon like that really does considerable damage.

I made a shaman build that’s pretty fun with this using tempest strike, earthquake, tornado (with the sticks to your character node), leap, and thorn totem. Get the extra mana on tempest strikes so you can earthquake as much as possible.

holy moly what drops that?

Monolith Lagon if I remember correctly.

Oh hey @boardman21 and other awesome LE build makers!
Think you could put together something beastly with this thing? (If you already haven’t

Where this guy at?

Did you make cold or lightning Shaman Tempest build? I keep in mind this sword for my melee cold Shaman, but it turned out this build won’t be able to be pure melee like Shaman Savagery builds in Grim Dawn.

When I find one I will try Melee cold with the idols that provide up to 40% chance to cast avalanche Boulder on melee hit, and specc avalanche to be double cast on critical strike and have huge impact area / fall speed.

Maybe a cold/light mix is also worthwhile, and up Elemental damage

Fire Shaman also looks interesting but as far as I know we have poor support for this concept. Hope we will get more options for fire builds.

What i did was Mainly Lightning with some cold mixed in.

Usually i don’t give away my exact buidls, since i highly advice people to experiment and try them selves, so i just gave some outlines.

If you want more specific stuff, feel free to ask.

Okay I got the weapon and got into some build now with my shaman 74. I`d say, I havnt found a way that makes the Kind of use of this weapon, that any 2 handed staff couldnt make better to be honest, because it seems any prefix on staff makes that staff way better. At least the way I want it to be - that is, 4 Idols that grant 7% Chance to cast Avalanche on melee hit.

I went with tempest strike specced to proc Nothing and get 20 mana per hit, to regain mana (due to many avalanches falling and maelstrom cast).

That gets up to 110% attackspeed with items and buffs, good crit buffs and 60-70%+ movementspeed and 28% Chance for Avalanche on each hit.

I got max GB/CSA and over 60% dodge with maelstroms.

Since avalanches deal double Damage or more with a staff - the melee Damage from Alluvion doesnt make that any better to be honest. Any attempt to specc into lots of +melee Cold or Lightning Damage and buff melee Damage, failed to make this any better haha

On the dummy, avalanche crits for 1-2k with the Sword, and 4-7k with the staff.

Going the lighning on hit/when hit/ spell cast route and Focusing more on that too, does make it better. But then again, with a staff its again even better. Tempest strike may be a better choice, for it gives 5% more melee crit or high +melee Cold Damage and Freeze rate per hit, whether one goes for Cold or Lightning.

The only Option I see left, is probably trying tempest strike. I might even use the “on spell” Idols, which gives 40% Avalanche Chance instead of 28% on hit. But with the 100% less attack Speed, that wouldnt make that difference I suppose

just the melee hits themselves might hit harder and make it worthwhile.

This is, me trying to make the “melee Avalanche stuff” work. Going full melee+spell with mael on hit Idols - or somthing else - might do it in a better way. The only Option I see left is trying the Ucenuis SPhere relic, which gives water orbs on hitting rare enemys - granting up to 360% increased Cold and Lightning Damage. And hoping for Avalanche Idols that give Lightning and Cold Damage, too. Because Right now, those arent pumped in any way.

But then again, why shouldnt it be better on a staff again

Or staff is just better

Hope this doesnt end up being another “useless” unique…

but hey… give it time, maybe there is a frozen two handed rogue with lightning for blood build that will make this work…

I went with earthquake this time, many aftershocks and “Avalanche on aftershock” additional to the melee Idols

Then maelstrom, Tornado, swipe, Avalanche - the usual, and then I stack mana reg on all items possible - chest ring Amulett relic. Gives a weeping 19 mana / sec and makes this viable and economical and super fun!

Only downside is, Avalanche and maelstrom can only give 1 frenzy and haste buff, although specced in different trees… so attack Speed locked at 106%/116%.

And finally, the loss in adaptive spell Damage on Alluvion and spell% /spell crit on staff, makes it better with a staff anyways.

Any ideas how to make the melee hit itself (here: swipe) viable? Seems the Investment just wont really do it, with Alluvions 90 base phys and ~35 light and Cold melee… turns out to be Kind of mediocre. IMO it should grant another +3% base crit to attacks and spells, and either grant something additional (80-200% light and Cold Damage), or have more Damage (50-70 light and Cold melee each), to make it viable to a random staff and an alternative to any Sovyna…

Seriously though, I dont know enough about the mechanics to make any recommendation at this higher grade level theorycrafting… maybe @boardman21 or @Rimed could chip in?