Answers to questions I see asked daily, feel free to ask any that aren't answered

I’m not as active in-game as i once was but i still check the forums daily and update this info so as far as i know it is all up to date and i will continue to update it with each patch.

I am not in any way affiliated with Eleven Hour Games and cannot provide answers to question about future mechanics. Use their ask-the-devs section on discord. https://discord.gg/lastepoch

For questions on the future features you can also look here Early Access Development Forecast . This is an official post from the developers. Thank you Sarno for sharing that link in discord.

I see a lot of people asking simple questions in chat in-game and far too many people are being toxic and providing either sarcastic or purposefully giving wrong info. I am very active in game have played all classes and understand most mechanics. I hope to start a guild/clan if they add either to the game. My in-game name is Servire feel free to add me and pm question in-game too. I have notifications enabled for the forum so i will answer questions fairly quickly.

ANSWERS TO COMMON QUESTIONS:
Here is everything you need to know about the 0.7.4 mastery system.

Quick guide for the new mastery system 0.7.4 (with pictures) General

The quest is also bugged atm and yes A LOT of mobs will spawn. Not really sure how to by-pass this. I personally die and they all disappear. OBVIOUSLY this wont work for HC. You will first need to complete the first Era and get to The End of Time [Album] Imgur [Imgur] You will need to go to the second floor of The End of Time and …

How to fix “bad graphics”, now I realize some people just don’t like the art style but others are actually having problems. I personally haven’t had a problem so I can’t confirm these work. Try changing the graphics then changing them back or try windowed full screen. Windowed full screen seems to also (again I cant prove this as I don’t know enough about tech) increase fps and help the game run smoother on your machine.
“Just to clarify - this works specifically with the resolution (e.g. 1920 x 1080).”-Sarno

There is no way to currently increase inventory and stash size. Between the crafting materials storage (press F) and the stash the devs (imo) gave more than enough room for items in the game currently.

No kind of multiplayer has been released yet. Though the developers have confirmed there will be in the future. When multiplayer is implemented you will not lose your current characters. They will still be stored locally on your pc. They however will not be able to be played online, so you will have to make new online chars. You will be able to choose offline or online when creating a character. This is confirmed by Sarno via their discord.

When you can no longer see loot on the ground press Z, sometimes it turns off on its own for some reason.

When an item fractures you can no longer craft onto it but you can still equip it and gain the stats from said piece of gear. There is no way currently to repair a fracture.

Sometimes chat will crash or something, which stops you from seeing and typing in chat. Press ESC and clikc “leave chat” and then “join chat” it will take a couple minutes for chat to come back but it should fix the problem. It does for me at least.

Totems are minions and therefore use totem and minion stats not character stats.

How to reset a passive at the bottom of your tree without resetting the whole tree:

How to passives at the bottom of a skill tree without having to reset the whole tree: General

First just realize that you need 5Xthe number of rows up you are. [Album] Imgur [Imgur] You need to keep the number of passive point listed invested in the tree below each “tier” of passives. So if you wanted to change a passive in the first row without removing any from the second row, just make it so you have more than 5 passives…

QUICK TIPS FOR NEW PLAYERS:
Get some void protection on any piece of gear ASAP. Void damage can be devastating in the first era. (It’s one of the reason I haven’t yet attempted a HC character.)
ALWAYS pick up uniques, they show up as an orange or green star on the minimap. Even if you already have it or it is useless they sell for 1k gold at any vendor.
Any time you see a vendor check for shattering runes. They cost 2k gold but are important for crafting.

CRAFTING:
Glyph of the Guardian: Some people (including myself at first) miss-interpret that this glyph can fix a fractured item “completely mitigates a minor fracture” does not mean remove it means it can prevent it IF you use before clicking forge it will increase chance for success.
When crafting if an item has more than 90% (or 80% if you’re feeling lucky I guess) chance of success use a Glyph of Stability instead as it makes crafting have a chance to add less instability allowing you to craft more onto an item before it shatters.
There are two types of modifiers when crafting “added” and “increased”. This can be seen when you press F beside each affix rune. “Added” will add a set amount as seen by a (+) so for example a “physical damage - added” will add +X phys damage. While “increased” adds a %multiplier so “physical damage - increased” will add a %X increased damage. So if you have 50 base damage and use an added affix rune and it adds 10 damage to the item you will have 60 base damage. If you use an increased affix rune and it adds 10% increased damage you will have 55 base damage. (50x0.10)+50 would be the equation. (Yes I know you don’t need that last zero and technically it is mathematically incorrect to put it, it will help with visualizations for some people.)

Would you like me to sticky this thread for greater visibility?

(You did tell us to ask you questions… this is a question.

That would be much appreciated. I have spent at least 8 hours in the last 2 days typing out answers in game for new players i would love all that info in one easy to find place.

I’m not a developer lol. I can’t provide answers to either of those questions. Use the discord. https://discord.gg/lastepoch

I thought passive points could never be changed? once placed, you would literally have to level a new toon to change them correct?

Nope they can indeed be changed at any time with gold. There is a person in the council chambers and the end of time. Look for the symbol on the minimap (press tab) that looks like a pink head with a brain. I’d upload a picture just let me figure out how. 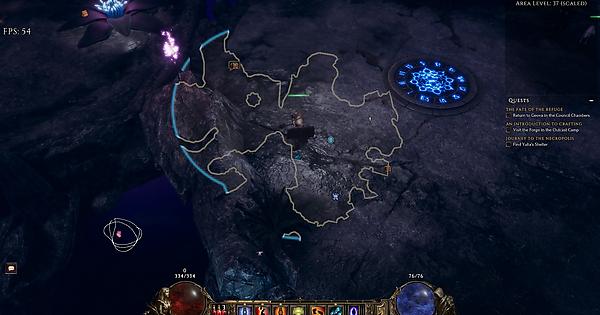 Sorry i misunderstood what you were trying to say. If you asking how you use it, you just click “Respecialize Mastery Point allocations.” which will allow you to get points back one at a time. To my knowledge there isn’t currently a feature to reset the whole tree at once. I have been told by players you also can’t change masteries by resetting points. I will test this personally today and edit this post.

Thank you for all the help with this post. Please let me know if it not in the direction the devs like to be i have no problem deleting it jsut give me a heads up so i can save it in a document on my pc.

Nice info. By any chance, do you know if a yellow item can drop with all four “affix-prefixes” at level 5? And how much of Void protection is enough? I have a bit over 700 and my L74 Nercro still feels like made of paper.

all non-uniques can only have 2 prefixes and 2 suffixes. I’m actually playing a summoner right now, here a pic of my stats i’ve only died once. Though my clear speed is a little slow. https://imgur.com/a/v9cHacl. im still missing proper rings and an amulet which will help my dps. If you want help with gear im more than willing to show what i have atm. Also my gear is only t3 or below. T4 and T5 stats are exponentially more powerful.