I’ve been goofing around with a more spell oriented hybrid Void Knight to see if I could make something viable. I am using both Abyssal Decay and Devouring Orb in this build.

I have both the node to let AD stack and auto recast and I wanted to try out Sequel of Decay. I and I noticed some really odd behavior with it. Here is what the tooltip says it should do: 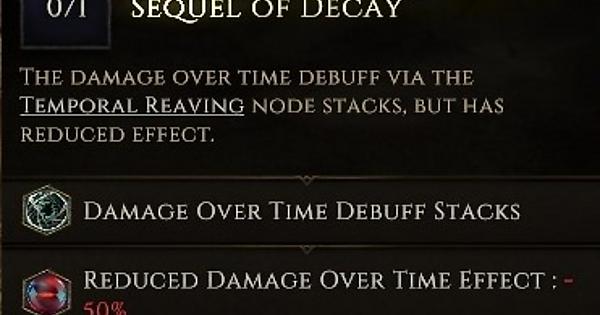 Well the reason I went to the dummy in the first place was because I got killed on a monolith after taking Sequel and it appeared my damage had dropped significantly. Sure enough, this is what I found:

Now according to the tooltip, on my second recast I should be at the same debuff level I was without it and from the 3rd cast on, I should be getting a greater effect. Notice how the damage stays very low and even more odd, just stops completely for awhile.

Here is the same test without Sequel of Decay:

It seems pretty clear the passive is not working as intended at all. It would be a good passive for an auto recast build like I am using if it worked correctly.

In 0.7.6c there’s a bug where Temporal Reaving actually reduced the damage enemies took, so that should be the cause of the behavior you’re seeing here. I’ve tested Abyssal Echoes internally and saw the damage enemies take increase after recasts. A fix for this will be in 0.7.7.

Thanks for the report!